What's the best way to get rid of my old stuff? 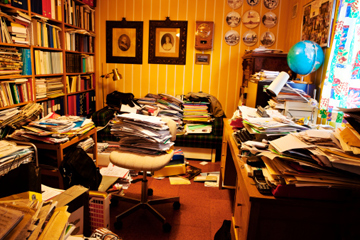 Do you really want to dust and move all this stuff around if you don't have to?
Dag Sundberg/Photographer's Choice/Getty Images

For a lot of us, spring means renewal, rebirth and spring-cleaning. But if you're tired of cleaning and shifting around items that you don't even like, it's time to declutter. We all have that junk -- um, stuff -- that we don't want but don't know quite what to do with, either.

There are many reasons why I keep stuff. Sometimes, it's because the item in question was a gift, and I wouldn't want to hurt anybody's feelings. What if Aunt Alice comes over and asks to see me in that hideous blouse or wonders where I chose to display that ugly vase? (Name changed to protect the innocent.) I applied the "maybe it'll be worth something someday" line of thinking to a "limited edition" Christmas ornament for over a decade without checking to see if it was, in fact, "worth something" (it's not). Sometimes, chucking something you spent money on just confirms that you made a mistake, so you do nothing instead. And the piles grow.

Figuring out what to keep and what to get rid of can be stressful enough (which is why I'm going to assume that you've already divided up your stuff into "stay" and "go" categories). Once you do, you're faced with the overwhelming number of ways you can dispose of it. There was a time when we didn't have many options for re-homing our belongings: Basically, we could throw them away, cart them to a thrift store or hold a garage sale. Happily, that first option isn't used nearly as often anymore because there are so many alternatives. I don't want my stuff, but I don't want it sitting in some landfill, either.

Thrift stores, like those run by Goodwill Industries International Inc., are an easy option because you can just bag or box up your stuff and drop it off. Garage sales are still a way to go, but you need to have a significant amount of stuff to make it worth the time and effort.

But thanks in no small part to the Internet, there are more ways than ever to say adios to your things. Do you sell them on Craigslist or eBay? Use Freecycle? Find a niche charity? Recycle them? How do you know which is the best option? And we're back to square one, with that pile of "go" stuff slowly melding, by virtue of inertia, back into "keep."

Here's how to divide and conquer when it comes to that stuff taking up space around your house.

To Sell or Not to Sell?

You might feel ripped-off because the thing you want to get rid of was a birthday gift, and it would feel really good to make some cash, wouldn't it? First, though, you have to take a realistic look at what you have. Yes, there's currently a wave of nostalgia for old toys, for example, but yours probably isn't worth selling if it's not in good condition. You could sell a piece of furniture that's well-made and in need of refinishing but probably not a cheap one that's falling apart. If you have a gut feeling that you have an antique or something truly rare, get it appraised before you ask way too much or way too little. You have a lot of options for selling, so I'll just look at the two powerhouses.

Lots of people sell things through eBay, and it's very user friendly. If you have no clue what your item is worth, you can view completed listings to see the going rate. Plenty of potential buyers are waiting by their computers, and you can get paid fast. Selling on a site like eBay has drawbacks, though. Long-time sellers have the advantage because they know the best ways to work the site, and people feel more comfortable buying from someone who's been around longer. Furthermore, eBay charges you for the listing and takes a cut of your sales. You have to decide things like what type of payment to accept and whether you're willing to ship overseas. Then you have to take the item to the post office. Many people prefer eBay for small items like clothes and toys -- shipping can get expensive fast.

Craigslist has become a popular way to sell stuff, but it's totally different from eBay. It's more like the classified ads in a newspaper (which people still use, believe it or not). You might have a hard time figuring out how to price an item but allow for some haggling room. It's free, and it's for locals -- meaning the buyer will probably want to come to your house to pick it up. It's a good option for large items, like that treadmill mocking you from the corner of your bedroom. Craigslist isn't as easy for buyers to search as eBay, and since it's free and doesn't require any sort of registration, you're kind of on your own. That means it's easier to get cheated. Still, if somebody's willing to pay you and pick up something that you'd otherwise have to figure out how to haul away yourself, it could be worth it.

If you're lacking time and motivation or you know that your stuff isn't worth the trouble, you still have options for making it disappear from your life. Some of them might even make you feel good about yourself.

Consignment stores sell gently used (usually name brand and currently in style) clothing, or sometimes other items like antiques. The perk is that somebody else worries about selling your stuff. The downside is the store takes its share, and it can take awhile to get paid. The longer the item sits, the more it gets marked down, just like at a regular store. You usually have to make an appointment, and then someone at the store will go through your stuff and tell you if they want to sell it and for how much. Consigning is really only worth it for high-ticket items. 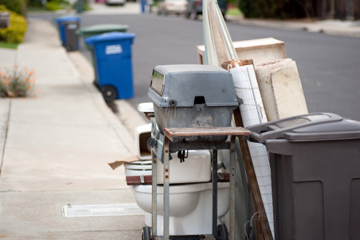 If all else fails, kick that unwanted stuff to the curb -- and watch it disappear!
Zoonar/Thinkstock

So you've decided that your stuff isn't worth selling, but you aren't ready to toss it in the trash. As long as you can pack it into your car and drive it over to your closest thrift store (some do pickups, too), that's still a possibility. You're rid of it, but you also have no idea what will happen to it.

Will it become someone else's treasure, or will it languish by the displays of VCRs and slow cookers? There's something poetic in that, but maybe you want a more concrete idea of what happens to your stuff. Most thrift stores donate their proceeds to charities and often employ people in need, but you can also find niche charities.

Overrun with books? See if your local library or schools would be interested in taking them off your hands. Even if they don't enter the collection, they could be sold to raise funds. Habitat for Humanity will often accept extra building materials such as leftover paint or extra tiles. Nice business attire could go to a charity that helps disadvantaged men and women seeking work, and those old bridesmaid dresses (depending on how old they are, of course) might work well for a teenager who otherwise couldn't afford a prom dress. You can often recycle old electronics.

Basically, if you get to Googling, you can probably find a creative way to liberate yourself of stuff. Keep in mind that some of these methods might require you to spend money on gas or postage, though. My favorite: My local animal shelter will gladly accept towels and blankets to line cages.

In some ways, Freecycle is easier than thrift stores because you don't have to leave your house. People have come to pick up items from me that I was 100 percent sure I'd be stuck hauling to the landfill. You just join a local chapter (which usually functions as an e-mail list or an online group) and follow their instructions for offering items. You can be as arbitrary about choosing takers as you like. This option does involve somebody coming by your house, but your stuff is gone and all you had to do was send an e-mail.

If none of these options works, there's still one that some people swear by: setting your gear out on the curb. Obviously, it depends on what it is and whether you have a homeowner's association that frowns on this sort of thing, but you might be surprised by what disappears before the garbage truck has a chance to take it.

My final words of wisdom: act decisively and fast, with no regrets. If it's sentimental but needs to go, take a picture. It doesn't take long for the best of decluttering intentions to go awry. And it's only stuff, anyway.

Like many people, I have a tendency to hang on to stuff that I don't really need ... but I hold on to it anyway because doing anything else takes time and decisiveness. I don't have much of either. What I did have was a room that I wanted to be an office/guest bedroom but was more of an office/dumping ground for stuff that has no other place to go. I knew that once I actually got my stuff sorted, I'd have to figure out what to do with it all. So when I found out I'd be writing a suite of articles about spring cleaning, I suggested that I write a piece on re-homing stuff because I knew I wasn't the only one who thought, "What now?"

Researching and writing the article helped me figure out my options. There was a time when my go-to would be to take it all to a charity thrift store. Now I've designated a few things for eBay, and I'll be selling others to a store that gives cash or store credit for gently used items. The rest gets listed on Freecycle. Somebody once took a rusted-out barrel we found on our property, so that gives me faith that I can find takers for just about anything. If not, thrift store, here we come.

How to Properly Fold Shirts and Sweaters
How to Organize Your Sewing Room and Patterns
Clean Habits: Secrets to Managing Your Cleaning Workload