Was Mom Right? Can you use newspaper to clean glass? 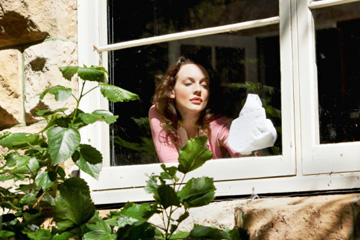 Step away from the paper towels!
Lifesize/Thinkstock

The thankless and sisyphean nature of cleaning glass has led many a homemaker to loudly declare that she doesn't do windows. But eventually, someone is gonna have to do the dirty work, lest your home be besieged by a permanent gray cast. Most of us just use plain old paper towels and live with the streaks and lint they leave behind. But there are many who swear by the combination of white vinegar and water applied with an old newspaper as their secret window-cleaning weapon of choice.

Well, for one, newspaper is cheap and readily available. Plus, it's disposable, so you don't have to launder it. And it's recyclable, so there's no guilt about landfill contributions. What's the downside? A handful of wet newspaper doesn't hold together so well. Also, the ink from wet newspaper can rub off on molding and trim, requiring more cleaning. It can also leave ink on your hands, although with the switch to water-based inks and more absorbent newsprint, there's less transference these days.

What is it about a newspaper that makes it an effective household tool? Some muse that it's all in the ink. Theories include that the old petroleum-based ink had a grit comparable to a light sandpaper, and others believe that the solvents used to make the older inks were effective cleaners. Of course, the paper itself has a somewhat gritty texture that's helpful in cutting through dust and dirt. It's been rumored that newsprint is a cousin to paper towels, and actually, this theory is probably the most scientifically close to why newspaper is effective at cleaning. Many papers, like the ones you find in magazines, have a material added -- called sizing, if you were wondering -- to make it more water-repellent. But newsprint has little to no sizing, leaving it super absorbent so it can hold onto the ink that gets printed on it. The high absorbency of the newsprint is likely what makes it so effective at cleaning windows. It actually absorbs the liquid instead of just pushing it around. And glass is a slick, non-porous surface, so the ink doesn't adhere to it like it does wood molding.

Despite the theorists who think the old ink was better, the vegetable-based inks that are used today are actually less likely to streak than the inks of the past. But it's agreed that newspaper as a window cleaner remains mostly a household tradition. The pros find a squeegee to be equally as effective but a whole lot faster. Many also agree that a cloth diaper or a rag with a tight knit weave work well.

A cloudy day is the best one to clean your windows. Sunlight dries the liquid solution you're using too quickly and leaves streaks.

Being Too Clean Can Be Almost as Bad as Being Too Dirty
How to Get Mildew Out of Clothes
Stop Goo Fail: Clean Stickers, Tape and Glue Off Glass