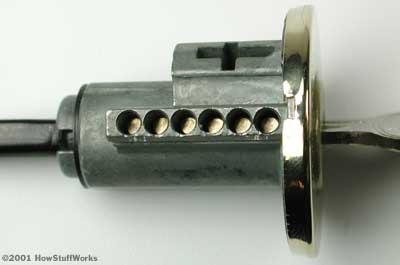 A pin-and-tumbler cylinder lock is popular because it is inexpensive but offers fair security.

In the last section, we looked at pin-and-tumbler cylinder locks. You'll find this sort of lock everywhere, from houses to padlocks. They are so popular because they are relatively inexpensive but offer fair security. For a typical pin-and-tumbler lock with five pins, there are about a million different pin configurations. When you consider the number of lock companies and lock designs, the chances of a criminal having the same key as you is fairly remote.

Another common type of cylinder lock is the wafer-tumbler lock. These work the same basic way as pin-and-tumblers, but they have thin wafer-shaped tumblers rather than pins. You pick the wafers exactly the same way you pick pins -- in fact, it is a little bit easier to pick wafer-tumbler locks because the keyhole is wider.

A wafer-tumbler cylinder lock works like a pin-and-tumbler lock, but it has wafer-shaped tumblers instead of pins.

Some designs use single wafers rather than wafer pairs. These wafers are spring loaded so that they extend out of the cylinder, binding with the lock housing. The wafers have a hole in the center that the key will fit through. The correct key pulls the wafers down just enough so that they are all retracted into the plug. The incorrect key will either pull the wafers down only part of the way or will pull them down too far, causing them to extend out the other side of the plug.

Double-wafer locks have wafer tumblers on both ends of the plug. To pick these locks, you work the wafers on both sides as you apply pressure with the tension wrench. Wafer locks are found in most filing cabinets, lockers and cars, as well as in many padlock designs.

Tubular locks offer superior protection to pin-tumbler locks and wafer-tumbler locks, but they are also more expensive. Instead of one row of pins, tubular locks have pins positioned all the way around the circumference of the cylinder plug. This makes them much harder to pick. Conventional lock-picking techniques usually don't work on this type of lock.

Some pin-tumbler locks have modified pins that make picking more difficult. In the most common variation, the upper pins have a mushroom-shaped head. This odd shape causes the plug to shift early, before you have actually pushed the top pin all the way up. This makes it more difficult to put the pins in position. It also makes it very hard to get an accurate feel for what's going on inside the lock.

Next, we'll look at rekeying locks and creating master keys.