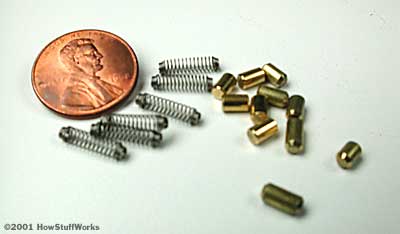 One cool thing about pin-and-tumbler locks is that you can re-configure them to fit an existing key (provided that the key is for the same lock design). The advantages of this are obvious: You can add new locks to your home or business without attaching a bunch of new keys to your key ring.

To make a new key for an existing lock, you cut a series of notches in the key so that it raises each of the upper pins just above the shear line. Essentially, you cut a pattern in the metal that matches the pattern of the pins in the lock. To change a lock so that it fits an existing key, you simply work in the opposite direction: You change the pattern of the pins in the lock so that it matches the pattern of notches in the key. If the lock is designed with a universal keying system, any locksmith can re-key the lock in no time. You can also get locks re-keyed at most hardware stores.

In this basic six-pin lock set, you can see how this re-keying works. When you open up the shafts in the cylinder and empty them out, you have six springs and 12 tiny pins. All of the upper pins are exactly the same size. The remaining six pins (the lower pins) will be of various lengths to match up with the notches on the key.

The process of re-keying a lock is very simple. The locksmith removes all of the pins from the cylinder. Then, drawing from a collection of replacement pins of various sizes, the locksmith selects new lower pins that fit perfectly between the notches of the key and the shear line. This way, when you insert the new key, the lower pins will push all the upper pins just above the shear line, allowing the cylinder to turn freely. (This process may vary depending on the particular design of the lock.)

It doesn't matter how long the upper pins are (since they all rest above the shear line when the key is inserted), so the locksmith simply re-inserts the six original upper pins that came with the lock. And that's all there is to re-keying. The entire process takes only a few minutes.

Master keys are an interesting technology somewhat related to lock picking (because they're means of getting past locks without the main key).

Some locks are designed to work with two different keys. The change key will open only that specific lock, while the master key will open that lock and several others in a group. In these locks, a few of the pin pairs are separated by a third pin called a master wafer or spacer.

In this lock design, the lowest pin would be the same length in each lock in the group, but the master wafer would vary in length. This lets one person, say a building manager, access many different locks, while each individual key-holder can open only his or her own lock.

In the next section, we'll look more closely at the differences between lock picking by locksmiths and illegal lock picking.