How to Make a Workbench 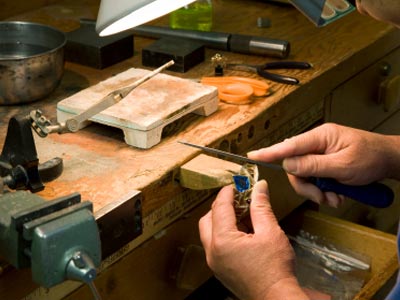 A workbench is a key instrument in any workspace whether it’s for woodworking, gardening or just repairing household items.­
­iStockphoto.com/King Wu

­A workspace without a workbench is like a pool without water. What's the point? If you've been taking apart your vacuum cleaner on the kitchen table or cutting 2x4s balanced across the arms of your Adirondack chair on the patio, it's time to bu­ild a workbench. The good news is that it doesn't take that much time and, with the right plan and the right tools, you might be surprised at just how simple and inexpensive it can be to build one.

One of the biggest advantages of building your own workbench is being able to customize it to your specific needs. There are two questions you should ask yourself before you hit the lumberyard. First of all, how much room do you have? Obviously your workbench is going to have to fit into whatever space you have set aside for it, so know the dimensions of that space [source: HGTV]. Secondly, what will you be using the workbench for? If you have specific needs, they should be taken into account during the planning stages. It's much harder to make additions or modifications to your bench later on than it is to incorporate them from the start.

­Now, you could go out and buy a prefabricated ­workbench at your local hardware store, but why not chose to customize your own -- it should cost less. Besides, the likelihood that a prefabricated workbench is going to fit perfectly in your workspace is pretty slim. If you do build your own, you'll be able to determine everything from the height, width and depth to whether or not you want to stain it or paint it.

If you're planning on building a workbench, chances are you already have the tools you'll need. If you don't, the fact that you want to build a workbench means you're probably going to be using tools like that in the future -- so they might be a good investment. At the end of the day, a workbench is a key instrument in your workspace, so take your time choosing the right plan and keep in mind the things you'll be using it for.

For some help deciding on the right plan for you, check out the next page.

OK, so you've committed to building a workbench. This means now it's time to pick out the right plans or -- if you're feeling brave -- draw up your own. This is where it gets fun. You can make it as simple or as complicated as you want.

The most important thing to consider when planning out your workbench is space. How much room do you have? At the end of the day your workbench should help you maximize the space you have available, whether it's an entire wall in your garage or a small corner between boxes of Christmas decorations and the lawnmower. One of the most important things to determine is the height of your bench. As a rule of thumb, it should be right around waist-height of the person who will be using it most [source: HGTV]. Once you've figured that out, you'll also want to determine the depth of your bench. You don't want to make it so wide that you can't reach the back of it, so consider what your reach is and go from there.

The purpose of your workbench will also help you pick out plans. You probably want something that's versatile and easy to use in a number of different circumstances, but you might have very specific needs in mind. For example, a workbench designed for building furniture will be very different from one that is used for gardening. Do you want drawers for your tools or do you already have a toolbox? Thinking about these things now will help save you money in the long run.

Once you know the size of workbench you're looking to build and what you plan on using it for, you can pick out a plan or design your own. There a number of plans on the internet for many different types of workbenches [source: Plans Now]. You can also pick up plans at most hardware stores. Usually, they're free because the store's owners assume you'll be buying everything you need to build your workbench from their store. Others may charge a small fee. If you find a plan you like but it isn't perfect, you can always modify it to suit your needs. Maybe you want more drawers or a larger work surface. This can be accomplished with a few minor calculations and a little extra planning.

While most people think the Crescent wrench was named for its crescent shape, Crescent was actually the name of the manufacturer who first produced this type of tool. It became widely used as a result of its versatility and those made by the Crescent Tool Company were so popular that the wrench adopted the company’s name, a name that has stuck for nearly a century [source: Everything 2]. ­

Tools Needed to Make a Workbench

Once you've picked out the plans, you'll know exactly how much lumber and hardware (such as nuts, bolts, screws and connectors) you'll need to build your workbench. The plans will most likely tell you what tools you're going to need as well, but just in case they don't, consider the following.

While power tools make most things easier, they aren't absolutely necessary. After all, people were building things long before electricity was available. With that being said, unless you want to spend days building your workbench, power tools are the way to go. First and foremost, you're going to need a circular saw to cut your lumber to the correct specifications [source: Lowe's]. There will be a cut list included with your plans and it's generally easiest to make all your cuts before you get started. Once you have all the right pieces, it's just like putting together a big puzzle, except you'll be using directions and power tools.

The next tool you're going to need is a drill [source: Hazelton]. While you could probably assemble a workbench with screws and a screwdriver, it would take a very long time and unless you're incredibly strong, your wrists and forearms would quickly become fatigued. Along with a drill you'll need drill bits. The size of the drill bits will depend on the size of bolts you'll be using. This information should be included in your plans, but if it isn't, you can pick out a drill bit at the same time you pick out your bolts. Just make sure they're the same size.

Aside from a circular saw and a drill, there are a number of smaller handheld tools you'll want to have around as well. These include a hammer, a screwdriver, a corner square, a measuring tape, a few clamps and a framing pencil. You'll also need bolts, nuts, screws, nails and wood glue. The quantity of each will be specified in your plans. For the sake of safety, it's always a good idea to have eye protection as well [source: DIY].

The only other thing you'll need to finish your workbench is sand paper or a belt sander. Once you've assembled the whole thing, you can sand it down and make it smooth. Again this can be done by hand, but a belt sander will speed up the process considerably. The last thing you want while working at your new bench is a splinter.

For additional information about workbenches and related topics, be sure to check out the links on the next page.

When choosing lumber for your workbench, you’ll want to stay away from treated lumber. While it will last longer, there are a number of concerns associated with the chemicals used to treat wood [source: Gegner]. Many of them are toxic and can be absorbed through the skin. Not only is untreated lumber safer, but it's cheaper as well.­

Could radiant floor heating systems be related to some cancers?
How to Humidify Your House
How is carpet made?