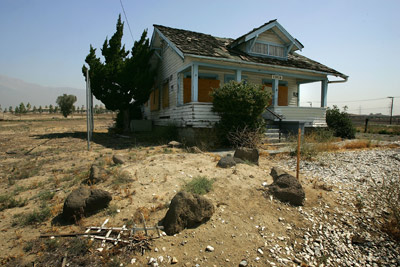 What happens to a house that is neglected -- or abandoned like this one along old Route 66 in Rancho Cucamonga, Calif.? See more home construction pictures
David McNew/Getty Images

Your home protects you from wind, rain, snow and even ultraviolet rays from sunshine. But those same elements can also prove fatal for a home if you don't do the routine maintenance necessary to keep it up.

Cleaning out gutters, recaulking windows and replacing roof shingles may all bore you to tears, but they are all imperative for keeping your house safe from the ravages of time and weather. But exactly what would happen if you simply stopped doing these things? How long would it take for your house to fall completely apart if you left it alone?

As it turns out, the amount of time necessary for your home to fall to pieces depends on several factors. The quality of your home's construction, the type of climate you live in, the shape your house is in and the materials your house is made of all contribute to the amount of time it would take for your home to deteriorate. But there is still a general process that a house undergoes after it's left to be reclaimed by the Earth. Alan Weisman describes the process of a house falling to ruin in his book, "The World Without Us." Weisman imagines how long it would take an Earth free of humans to regain its pre-humanity state. There is also an animated video on his Web site that shows a house falling apart over time.

So what causes the worst destruction? As it turns out, water is your home's foremost enemy. It begins a chain of events that will result in your home's complete collapse -- beginning with your roof. Water generally enters your home through the roof. This section of your house is held together by a series of trusses, triangular-shaped structures to which your roof is nailed. The roof, usually a type of plywood, is nailed to the trusses and then covered with roofing shingles.

Most shingles used in home construction are rated to last 20 or 30 years. As they begin to decay, the shingles will disintegrate or fall away from the roofing nails that hold them in place. The exposed plywood will be no match for the rain falling upon it. Eventually, the plywood will rot, and water will make its way through your leaky roof into the interior of the house below. Here, it will go to work on wallpaper, paint and drywall.

Water can also enter your home's envelope -- the combination of the exterior walls, window sashes and door frames that sit just inside your home's outer shell. If this happens, it can mean the end of your home. The process of deterioration begins on a small scale, but, if overlooked or neglected, will grow to rather large proportions over time. For example, your home's gutters will attract leaves and other debris. As this mess accumulates, water will spill back onto your roof, causing rot throughout your roofline. And then the trouble really begins.

Read the next page to find out how your house will fall apart and how long it can take.

A big thank you to John Badger of Fidelity Home Inspections and Les Fossel of Les Fossel Home Restoration Resources for lending their expertise to this article. 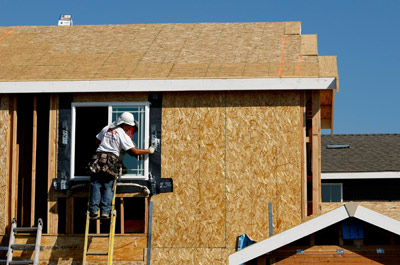 If installed correctly, the seal between the walls and windows of this house in Richmond, Calif., should last about 25 years. Without upkeep, however, it will crack and disintegrate over time.
Justin Sullivan/Getty Images

By now, you have a nice-sized hole in your leaky roof. Water is coming in, and worse, it’s spreading. When it’s not raining, and it’s cold outside, the hole in your roof will allow lots of cold, dry air to enter. Your cellar, basement or crawlspace, however, will retain warmth and humidity. Condensation forms where the two meet and create a miniature meteorological front. The resulting moisture will cause the paint and wallpaper to peel. This is, by far, the least of your worries.

The roof isn’t the only place water can enter. The caulk that your homebuilder used to seal your windows has about the same lifespan as your roof shingles, so you can expect the seal to crack and disintegrate within about 25 years of its application. This, too, will allow rain, snow and frost to enter. It will rot the wall surrounding the window, and allow moisture further into your home’s envelope, causing rot and collapse.

Interestingly, a brick home won’t fare much better. All things being equal, says home restoration expert Les Fossel, wood and brick homes will deteriorate at about the same rate. If your home is built of brick, moisture gets into the shell inside the brick exterior. Or, if your home is built with more than one layer of brick, the moisture will find its way into the gap between the two brick walls where it will freeze and contract, depending on the climate where your house is situated. Once this happens enough times, the brick walls of your home will collapse. Even if you live in a warm climate, the mortar holding your brick walls together will eventually deteriorate enough so that they will no longer bind the brick together. This, however, would take much longer than compression from freezing water.

If water is still running to your house, it will escape through cracks in the gaskets that deteriorate. This will add plenty of extra water to your home’s interior, further accelerating rot. If they are drained before you neglect your home, though, your metal plumbing and gas pipes will be among the last remnants of your home to remain, long after your house collapses.

Water also serves as a catalyst for other processes, too. In addition to rotting the wood that holds up your house, it also attracts all manner of bugs. Termites -- which are found more often in warmer climates -- love to eat wood, using bacteria in their stomachs to break it down into cellulose. But colder climates don’t get off scot free. There, carpenter ants have the same effect on wood, boring holes into the wood for use as nests. There are also many other varieties of insects that love to eat or live in the wood that was used to create your home’s structure -- and all of them work best when moisture is present.

So now you have peeling paint, a major hole (or holes) in your roof, wasted drywall, and precipitation entering through the gap between your windows and your walls. Are you ready to give up your protest and start taking care of your house once more? No? OK -- read the next page to find out about your home’s final years. 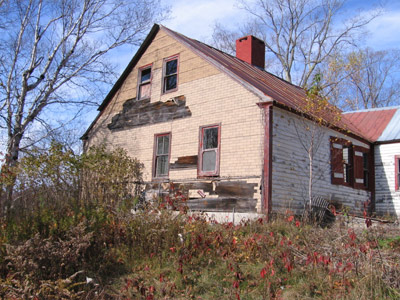