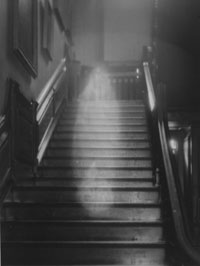 Documenting ghosts can be a fairly tricky endeavor. First, paranormal investigators must locate a house or other site where ghostly activity has been reported. After permission to set up shop in a supposedly haunted locale has been granted, investigators have to lug in all manner of highly sensitive equipment, like thermal imaging cameras and electromagnetic field meters. Once they're ready, investigators enter a waiting game that can test anyone's patience.

In most cases, the hunt amounts to little more than a silent night of listening intently in the dark of an old house with nothing to show for it. Even when evidence is successfully documented, it can usually be explained away by skeptics.

Take the famous photo of the "Brown Lady." Two photographers from Country Life magazine were documenting Raynham Hall, a manor house in England, when one pointed to the staircase and shouted for his partner to quickly shoot a photo. After the negative was exposed, a ghostly apparition appeared. The owners of the home concluded that the image was the manor's resident ghost, believed to be Dorothy Walpole, wife of the home's original owner, who died in 1729 [source: Fortean Times].

­Like most other apparent visual evidence of ghosts, the photo was dismissed as a double exposure. Indeed, close inspection of the photograph shows two images of the same staircase. Just as double exposure generally dismisses photographs of apparitions, skeptics have another pat answer for ghosts caught on audio: The sounds are the simply the result of a house settling.

It certainly makes sense; older houses are the likeliest to be inhabited by ghosts (if they exist) since they've had more time to develop a history. On the other side of the coin, an older house would be likelier to settle, since it's had more time to sag. But do houses even settle, or is this simply a fabrication by skeptics to discount the existence of g-g-g-ghosts? Find out if houses really settle on the next page.