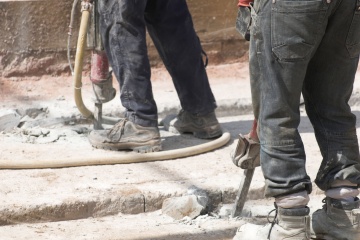 Imagine having to do the work of a jackhammer using a sledgehammer or a pickaxe, and you'll quickly understand how important this one machine is to the construction industry.
©iStock/Thinkstock

Concrete, asphalt and rock are hard -- sometimes really hard -- to work with. Thanks to that toughness, roads and building foundations last for decades. But when rebuilding or mining projects require removing these unyielding substances, a sledgehammer just isn't enough. That's when jackhammers come in handy.

T-shaped jackhammers are among the most iconic, fearsome and ear-shattering tools on construction and demolition sites. Because they combine two fundamental human hand tools (a hammer and a chisel) in one mechanized body, they are also one of the most useful.

Without jackhammers, we humans would need new systems to rid our paths of old concrete or rock. We could always go back to the old way -- using heavy-headed sledgehammers -- but there probably aren't enough chiropractors in the world to keep construction workers' backs aligned.

That doesn't mean jackhammers are easy to use. They tend to be unwieldy, with some weighing nearly 100 pounds (45 kilograms), meaning that safe operation requires a user with some muscle. Otherwise, you risk dropping the tool, which could damage the innards of the jackhammer ... or the person using it.

In spite of the challenges of using jackhammers, these tools really are necessary for all sorts of major projects. And even though they perform a straightforward and brutal task, modern jackhammers are thoroughly evolved and refined machines with a long history. Keep reading and you'll see just how jackhammers came to be.

In the middle of the 1800s, the Industrial Revolution's effects were being felt all around the world. Machines and power tools of all kinds made labor easier and less physically taxing. But men working in mines and quarries still had to work with pickaxes and shovels, cussing their way through the day.

Brawn just wasn't enough for these exhausting jobs. What these laborers really needed was a more powerful way to break through rock to reveal minerals or release stones for construction.

Their salvation came from the mind of a car man in Detroit. Although Henry Ford is popularly credited with inventing the first automobile, it was actually Charles Brady King, an inventor and engineer, who created and drove the first motorized carriage. In March of 1896, King roared along the avenues at about, well, 7 miles (11 kilometers) per hour.

In addition to the first motorized car, King created more than 60 different machines in his lifetime, including a range of pneumatic tools, among them, the jackhammer.

Jackhammers were a godsend of sorts, particularly in the mining industry. In the 1800s, mining was downright treacherous and miserable work. Breaking up rock by hand in damp, dark tunnels was not a joyful experience for most laborers. Steam engine technology of the day might have helped expedite the process, but because these machines required combustion, they were far too dangerous for use in tight quarters that often filled with explosive gases.

Compressed air was a much safer option. That's exactly what King had in mind when he created the first pneumatic (air-powered) jackhammer. On the next page you'll read about the various types of jackhammer technologies, including the long-lived pneumatic versions. 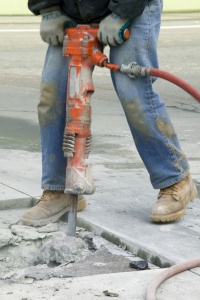 All that destructive power? It comes from simple compressed air on many models.
©Thinkstock

Although they perform a simple, almost primal feat of pounding and breaking, the inner workings of jackhammers are complex. Their exact construction varies from model to model, but there are some similarities in how they function.

Electric jackhammers are usually lighter weight models best suited for small jobs or for handymen. Gas versions are designed for job sites where there's simply no power or compressed air.

Pneumatic jackhammers were (and still are) among the most popular types of jackhammers. They became the standard in large part because of the specific needs of underground mining, in which any sparks from combustion engines threatened to ignite explosive gases. Not only was compressed air nonflammable, it didn't lose its power through long delivery hoses, even when the compressor was located many feet from the pneumatic tool at the other end.

A pneumatic tool is a device that uses highly compressed air as its power source. Typically, a diesel engine drives the air compressor, which then forces the air through a hose to the end tool -- in this case a jackhammer.

The body of a jackhammer is a vertical cylinder, which acts as a pressure chamber. Compressed air enters the chamber and activates a trigger valve, which rapidly opens and closes. When opened, the piston allows pressurized air into a piston chamber. Pressure rises in the piston chamber, causing the piston to move, striking the bit. The bit (or chisel) strikes the surface below, causing rock to fracture.

After the piston slams into the bit, the trigger valve closes and redirects the compressed air to the cylinder below the piston. The energy of the air, along with a spring, forces the bit back into its original position. Then the process begins anew. Typically, there's at least one exhaust valve on the cylinder that relieves pressure during the up-and-down piston cycle.

Hydraulic jackhammers work in the same manner but use fluid instead of compressed gas. These are typically larger, heavier and more powerful models that are mounted to big construction rigs and, thus, are used for jobs too big for a handheld jackhammer.

Jackhammers are a type of percussive drill. They pound away at a surface to break it into smaller pieces. The mass of the tool itself, along with gravity, are two main elements that make jackhammers work because they help weigh down the machine and keep it in contact with the target.

As the bit impacts the rock at between 1,000 and 4,500 hits per minute, it immediately stresses the surface and causes the formation of irregular fragments. The bit pulverizes these fragments into a fine powder or granules that tend to pool around the tip of the bit.

Although these powdery remains absorb some of the bit's energy, they also transfer that energy to surrounding rock. Larger cracks form as the bit pounds the rock. Typically, those cracks stabilize as the bit hits its maximum reach.

As the bit retracts, it pulls along many of the rock chips, leaving behind a small crater. In some jackhammers, a valve opens and flushes the crater with a blast of air or water to clear the hole of debris.

Then, the operator moves the tool back a few inches and triggers the jackhammer again, restarting the process and propagating the initial smaller cracks into larger ones. Larger, deeper fractures in the rock join together, causing the breakage of large pieces that workers remove with other tools or larger machines.

It's important to clear craters as the job progresses. Otherwise the jackhammer might continue shattering chunks into smaller and smaller pieces that get in the way.

There are several types of bits for different jobs. For basic breaking purposes you'd chose a point bit, which, as its name implies, is simply a pointy shard of metal. To create a cleaner edge and provide better control of cracking direction, you might want a flat bit. These can be either narrow or wide depending on the job. Wider bits don't penetrate very quickly, so using them often takes longer.

Regardless of the style, it's vital to avoid going too deep into the rock. It's extremely easy to get the bit stuck, meaning you'll be taking an unscheduled break until you figure out how to loosen it.

Sharp bits are critical for maximum efficiency. When bits become dull, both the man and the machine have to work much harder to crush and crack the rock. That means you should sharpen the bit regularly, and the harder the rock, the more often you should check the bit.

Most jackhammers are used to work straight down or on an incline. It's possible to hammer horizontally, but because of the tool's immense weight, this task requires two people, or better yet, a jackhammer stand that supports the heft without human help. Overhead hammering requires smaller jackhammers or machine assistance. 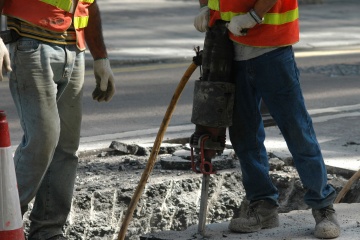 Shift change! Rotating the workers running a jackhammer helps reduce the risk of damage from the repetitive stress on their muscles and bones.
©iStock/Thinkstock

Jackhammers are heavy, powerful tools, and they take a toll on the human body. The weight and vibration inherent to jackhammers tends to wear out even hardened construction workers.

Some companies regularly rotate workers on jackhammer duty to save their strength and spare them the constant work of controlling such powerful machines. Adequately rested workers are less likely to make mistakes or hurt themselves.

Jackhammers are renowned and often despised for the racket they create. That's why many modern jackhammers include silencer boots to dampen their noise output. Yet these rock-breaking marvels still rate as one of the noisiest tools, often subjecting workers to 130 decibels, which is louder than a jet engine at takeoff. As such, hearing protection is necessary protective equipment for both the jackhammer operator and anyone nearby.

Excessive vibration from jackhammers can also damage the human body. Even with vibration dampening components, the relentless violence exacted upon the concrete below comes back on the operator to some degree. Too much vibration can cause fatigue, headaches, stomach issues, insomnia, and muscular and skeletal issues.

Medical researchers link power-tool vibration to Raynaud's phenomenon, which affects blood vessels in the extremities. After too much jackhammer vibration exposure, people who suffer from this condition wind up with poor circulation in their hands, which might even turn white from lack of blood. 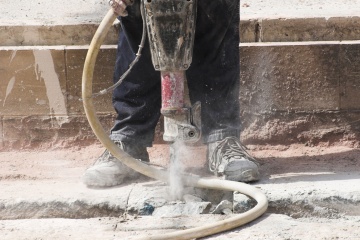 Jackhammers can kick up a lot of fine particulate, so wearing a face mask and wetting the work area are good ideas.
©iStock/Thinkstock

Jackhammers often create clouds of dust, and sometimes that dust can be dangerous. For example, breaking up concrete pavement can release crystalline silica, which is known to cause lung cancer. To keep dust levels down, workers can attach a hose that sprays a mist of several ounces of water per minute, wetting the work area for a safer breathing environment.

Shrapnel is not unusual, so it's a really good idea to wear long, tough pants and long-sleeved shirts. Steel-toed boots are also recommended. And because jackhammers are heavy, some have optional lift-assist technology that pushes the tool upwards out of the ground, making it much easier to move around in the work area.

Although jackhammers make quick work of many substrates, they aren't the right tool for every demolition job. On some sites, buried gas or electrical lines might lurk beneath the surface, just waiting for a jackhammer's hefty bite to suddenly make the local emergency room a lot more exciting.

It's easy to point out the dangers of jackhammers. They are powerful machines with potential for serious destruction. But, of course, destruction is the whole point. Without their fantastic pounding power, we'd be stuck with horribly inefficient pickaxes and shovels and sledgehammers. And no matter how strong you might be, you definitely do not want to break up an old highway by hand.

Once upon a time, I had a job that required me to remove floor tiles. If you've never tried to scrape rock-hard tile from a concrete floor, let me assure you that you never want to try. Using a simple hand scraper, you slide the flat metal head as hard as you can until it slams into the edge of a tile. If you're lucky, the tile explodes into pieces. If you're not so fortunate, you repeat this process relentlessly until your hands are numb or you break down in tears (or both). Unbeknownst to me, there is a type of jackhammer that automates this process and would have made my life much easier. Unfortunately, my boss was too cheap to provide one.

Fasteners
What are some repairs that require vise-grip pliers?
What are pan head machine screws?