Before the invention of the light bulb, illuminating the world after the sun went down was a messy, arduous, hazardous task. It took a bunch of candles or torches to fully light up a good-sized room, and oil lamps, while fairly effective, tended to leave a residue of soot on anything in their general vicinity.

When the science of electricity really got going in the mid 1800s, inventors everywhere were clamoring to devise a practical, affordable electrical home lighting device. Englishman Sir Joseph Swan and American Thomas Edison both got it right around the same time (in 1878 and 1879, respectively), and within 25 years, millions of people around the world had installed electrical lighting in their homes. The easy-to-use technology was such an improvement over the old ways that the world never looked back.

The amazing thing about this historical turn of events is that the light bulb itself could hardly be simpler. The modern light bulb, which hasn't changed drastically since Edison's model, is made up of only a handful of parts. In this article, we'll see how these parts come together to produce bright light for hours on end.

Light is a form of energy that can be released by an atom. It is made up of many small particle-like packets that have energy and momentum but no mass. These particles, called light photons, are the most basic units of light. (For more information, see How Light Works.)

Atoms release light photons when their electrons become excited. If you've read How Atoms Work, then you know that electrons are the negatively charged particles that move around an atom's nucleus (which has a net positive charge). An atom's electrons have different levels of energy, depending on several factors, including their speed and distance from the nucleus. Electrons of different energy levels occupy different orbitals. Generally speaking, electrons with greater energy move in orbitals farther away from the nucleus. When an atom gains or loses energy, the change is expressed by the movement of electrons. When something passes energy on to an atom, an electron may be temporarily boosted to a higher orbital (farther away from the nucleus). The electron only holds this position for a tiny fraction of a second; almost immediately, it is drawn back toward the nucleus, to its original orbital. As it returns to its original orbital, the electron releases the extra energy in the form of a photon, in some cases a light photon.

The wavelength of the emitted light (which determines its color) depends on how much energy is released, which depends on the particular position of the electron. Consequently, different sorts of atoms will release different sorts of light photons. In other words, the color of the light is determined by what kind of atom is excited.

This is the basic mechanism at work in nearly all light sources. The main difference between these sources is the process of exciting the atoms.

In the next section we'll look at the different parts of a light bulb.­ 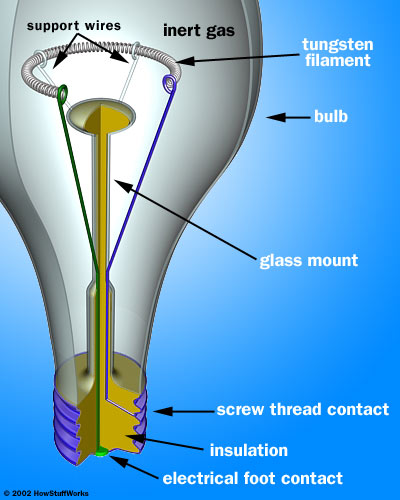 Light bulbs have a very simple structure. At the base, they have two metal contacts, which connect to the ends of an electrical circuit. The metal contacts are attached to two stiff wires, which are attached to a thin metal filament. The filament sits in the middle of the bulb, held up by a glass mount. The wires and the filament are housed in a glass bulb, which is filled with an inert gas, such as argon.

As the electrons zip along through the filament, they are constantly bumping into the atoms that make up the filament. The energy of each impact vibrates an atom -- in other words, the current heats the atoms up. A thinner conductor heats up more easily than a thicker conductor because it is more resistant to the movement of electrons.

Bound electrons in the vibrating atoms may be boosted temporarily to a higher energy level. When they fall back to their normal levels, the electrons release the extra energy in the form of photons. Metal atoms release mostly infrared light photons, which are invisible to the human eye. But if they are heated to a high enough level -- around 4,000 degrees Fahrenheit (2,200 degrees C) in the case of a light bulb -- they will emit a good deal of visible light.

The filament in a light bulb is made of a long, incredibly thin length of tungsten metal. In a typical 60-watt bulb, the tungsten filament is about 6.5 feet (2 meters) long but only one-hundredth of an inch thick. The tungsten is arranged in a double coil in order to fit it all in a small space. That is, the filament is wound up to make one coil, and then this coil is wound to make a larger coil. In a 60-watt bulb, the coil is less than an inch long.

Tungsten is used in nearly all incandescent light bulbs because it is an ideal filament material. In the next section, we'll find out why this is, and we'll examine the role of the glass bulb and inert gas.

We'll look at what the filament is made of in the next section.

As we saw in the last section, a metal must be heated to extreme temperatures before it will emit a useful amount of visible light. Most metals will actually melt before reaching such extreme temperatures -- the vibration will break apart the rigid structural bonds between the atoms so that the material becomes a liquid. Light bulbs are manufactured with tungsten filaments because tungsten has an abnormally high melting temperature.

But tungsten will catch on fire at such high temperatures, if the conditions are right. Combustion is caused by a reaction between two chemicals, which is set off when one of the chemicals has reached its ignition temperature. On Earth, combustion is usually a reaction between oxygen in the atmosphere and some heated material, but other combinations of chemicals will combust as well.

The filament in a light bulb is housed in a sealed, oxygen-free chamber to prevent combustion. In the first light bulbs, all the air was sucked out of the bulb to create a near vacuum -- an area with no matter in it. Since there wasn't any gaseous matter present (or hardly any), the material could not combust.

The problem with this approach was the evaporation of the tungsten atoms. At such extreme temperatures, the occasional tungsten atom vibrates enough to detach from the atoms around it and flies into the air. In a vacuum bulb, free tungsten atoms shoot out in a straight line and collect on the inside of the glass. As more and more atoms evaporate, the filament starts to disintegrate, and the glass starts to get darker. This reduces the life of the bulb considerably.

In a modern light bulb, inert gases, typically argon, greatly reduce this loss of tungsten. When a tungsten atom evaporates, chances are it will collide with an argon atom and bounce right back toward the filament, where it will rejoin the solid structure. Since inert gases normally don't react with other elements, there is no chance of the elements combining in a combustion reaction.

Cheap, effective and easy-to-use, the light bulb has proved a monstrous success. It is still the most popular method of bringing light indoors and extending the day after sundown. But by all indications, it will eventually give way to more advanced technologies, because it isn't very efficient.

Incandescent light bulbs give off most of their energy in the form of heat-carrying infrared light photons -- only about 10 percent of the light produced is in the visible spectrum. This wastes a lot of electricity. Cool light sources, such as fluorescent lamps and LEDs, don't waste a lot of energy generating heat -- they give off mostly visible light. For this reason, they are slowly edging out the old reliable light bulb.

For more information about incandescent light bulbs and other lighting technologies, check out the links on the next page.

Light bulbs are ranked by their power -- the amount of light they put out in a certain period of time (measured in watts). Higher-watt bulbs have a bigger filament, so they produce more light.

A three-way bulb has two filaments of different wattage -- typically a 50-watt filament and a 100-watt filament. The filaments are wired to separate circuits, which can be closed initially using a special three-way socket.