How does a water softener work? 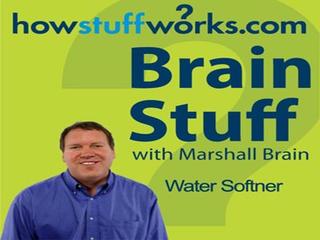 Quick: What’s hard and scaly and dwells in your pipes? No, it’s not the pet alligator your parents flushed down the toilet -- he’s grown up and terrorizing the sewers of Chicago. We’re talking about hard water.

We call water "hard" if it contains a lot of calcium, magnesium or other minerals. Groundwater acquires these metals by dissolving them from surrounding soil and rock. Industry measures water hardness in terms of grains per gallon (GPG) or milligrams per liter (mg/L). A grain is defined as 64.8 milligrams of calcium carbonate [source: Business Dictionary]. If your water tests at 1 GPG (17.1 mg/L) or less, then you have soft water. Water around 1-3.5 GPG (17.1-60 mg/L) occupies a gray zone between soft and slightly hard water and 3.5-7 GPG (60-120 mg/L) is moderately hard. Hard water is around 7-10.5 GPG (120 - 180 mg/L), and very hard water is above that [source: Water Quality Association].

How do all those number affect you? Hard water causes two problems:

You can combat hard water in various ways, including filtering it by distillation or reverse osmosis, adding a packaged chemical softener such as powdered borax or washing soda (sodium carbonate), or running it through a water softener.

Filtration in sink taps and refrigerator water dispensers improves water's taste, but its steep price tag makes it impractical as a household solution. Packaged chemicals soften water in small batches, such as washing machine loads, but render the water undrinkable, take a toll on clothes, and, in some cases, contain phosphates that harm the environment.

Descaling offers an alternative to water softening. Whereas a water softener removes the problem (minerals in the water), a descaler addresses the damage caused by the problem (scale buildup). You will sometimes see ads for "salt-free water softeners," which are actually descalers, or for magnetic water softeners, which remain unproven and don't change the chemical composition of water, so buyer beware [source: Powell].

With all this in mind, it's clear why water softeners are so popular: They remain the least costly and most effective way to rid your water of troublesome minerals.

In the next section, we'll take a peek inside a water softener and find out why plastics beads aren't just for Mardi Gras.

Water softeners operate on a simple principle: Calcium and magnesium ions in the water switch places with more desirable ions, usually sodium. The exchange eliminates both of the problems of hard water because sodium doesn't precipitate out in pipes or react badly with soap. The amount of sodium this process adds to your water is quite small -- less than 12.5 milligrams per 8-ounce (237-milliliter) glass, well below the standard set by the Food and Drug Administration for "very low sodium" [sources: Shep, U.S. Food and Drug Administration]. If you have health concerns, discuss them with your doctor, or consider either using a different kind of softener or only softening wash water.

The ion replacement takes place within a tank full of small polystyrene beads, also known as resin or zeolite. The negatively charged beads are bonded to positively charged sodium ions. As the water flows past the beads, the sodium ions swap places with the calcium and magnesium ions, which carry a stronger positive charge.

So why do you load up water softeners with salt if the plastic beads do all the work? Over several cycles, calcium and magnesium replace all of the sodium in the beads, after which the unit can no longer soften water. To fix this problem, the softener enters a regeneration cycle during which it soaks the beads in a strong solution of water and salt, or sodium chloride. The sheer amount of sodium in the brine solution causes the calcium and magnesium ions in the beads to give way, and the beads are recharged with sodium. After regeneration, the water softener flushes the remaining brine, plus all of the calcium and magnesium, through a drainpipe. Regeneration creates a lot of salty water -- around 25 gallons (95 liters).

Most home water softeners use the plastic bead and salt approach. The main difference between them is how they decide when to regenerate. Some softeners use electric timers that flush and recharge based on a regular schedule. Others use a computer that judges bead depletion based on water use. Still others use a mechanical water meter to measure water use and kick on the recharging process only when sodium exhaustion requires it.

Each approach comes with its share of pros and cons. Electronic timer units can't dispense soft water while recharging. Conversely, some computerized systems carry a reserve resin capacity, so you can tap them for a squirt or two of soft water even during recharge cycles. Most flexible of all are mechanical systems, which come equipped with two mineral tanks. One tank can make soft water while the other recharges.

Modern water softeners run between $400 and $2,700, and are designed to be easy to install and remove, which is good news if you want to take your unit with you when you move. However, unless you are confident in your electrical and plumbing abilities, you might want to hire a plumber, which could add $100 to $600 to the initial cost of your unit. Some stores include installation with the purchase of a water softener.

Softening: Hard on the Earth

Water softeners break down salt (NaCl) into sodium ions (Na+) and chloride (aka ionic chlorine [Cl-]) and then release the polluted water into septic systems or sewers. Sewers transport it to treatment plants, which deal with the water and discharge it into groundwater or surface water. There, chloride may harm freshwater organisms and plants, including altering reproduction rates, increasing species mortality and altering local ecosystems. If you want to reduce your environmental impact, soften water only when necessary; maximize efficiency by using minimum salt dosages and regenerating more frequently; and use a softener that regenerates based on actual use [source: Wisconsin Bureau of Wastewater Management].