Let's say you're house hunting, and you find a house that you absolutely love. It's the perfect size for your family and has amazing features like beautiful woodwork and antique glass. The owner will even let you have this house for the unbelievable price of one dollar. What's the catch? You have to move the house. House moving requires picking the house up from its foundation and setting it down in another spot, sometimes miles away.

This scenario sometimes happens in building booms, when landowners want to build a bigger home on their property. Giving the previous home away saves the owner the cost of demolition. It's also more environmentally friendly to recycle the house instead of sending the many parts to a landfill.

There are other reasons to explore moving a house. If a home is subject to dangers such as flooding, you can relocate it to a safer spot. Homes may be moved because they're in the way of development, such as encroaching shopping centers or highways. Historic homes can be preserved even if the land is used for something else. Moving a home may also be a solution to something as simple as not liking the view or the neighbors.

It's not necessarily a cheap solution to an unlikeable neighbor, though. Before you start digging up your house, you'll need to consider whether house moving makes financial and logistical sense. Will it be cheaper to move a home or build a new one? Are there limits to what can be moved and where it can go? On the next page, we'll take a look at what goes into planning a house move.

Nowhere to Go But Up

Homes don't necessarily have to be moved long distances; in fact, with house raising, you don't have to go anywhere but up. House raising involves the same steps of moving a house, but instead of carting the house away, it sits elevated above its foundation. The ground below the home is excavated, allowing room to expand downward. The new flooring and foundation are poured, and then the home is placed on its new foundation. House raising might be done if the foundation is damaged, or if the homeowner wants to expand her home. Raising the house is cheaper than building on top of the structure, saving as much as 50 percent [source: Fetters]. 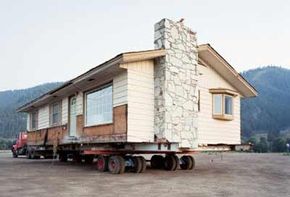 House movers have the jacks, steel beams and dollies you'll need to get to this point.
Frick Byers/Stone/Getty Images

Most of the work of moving a house actually happens before equipment arrives on the property. House moving usually requires an intensive planning and coordination stage. You'll have to work with local planning departments to ensure the move is allowable and to obtain building permits for both the old and new sites. Inspectors may have to examine the structural integrity of the house, and contractors may have to create the new foundation. Local or state departments of transportation will have to approve the route for transporting the house.

You'll also need to contact the bank or company that holds a mortgage on the home because they'll need to approve the process. If you need a construction loan to cover the moving costs, your application may take a little longer. Be prepared to explain the process to the lender because a bank may get especially nervous hearing about its investment being pulled down the road.

A professional house mover can help you jump through all these hoops. House moving is usually conducted by experienced professionals because they have the proper equipment and structural expertise to keep the home safe. You can search for a house moving company in your area by consulting the International Association of Structural Movers' database of members.

A house mover will help you with the engineering calculations that go into deciding how to move a home, as well as let you know if moving a home makes good financial sense. The structure in question, the route of the move and the new site must be carefully considered when planning a move.

Before calling the house mover, have the following information handy:

Generally, a brick home is more expensive to move than a wooden one, and larger homes are more expensive than smaller one-story buildings. Home movers can pick up just about any building, including giant mansions, so this information will help you determine if the house move is worthwhile financially.

You'll also need to gather blueprints or planning documents for the home to provide information about the structural elements of the home, such as the foundation and support beams. This information will help the mover determine what structural support the home will need during the move. The mover will also want to know if you intend to take along any additions, like garages or porches. In most cases, these additions can be moved at the same time if they're supported properly. Brick structures such as fireplaces and chimneys can sometimes be moved, although their weight will add to the overall moving cost. Some builders recommend having them removed and re-bricked at the new home.

Home movers will usually visit the home in person to help figure out these details, but they're going to want to see more than just the structure. The route the house will take is an important factor in the feasibility of the move…and one of the major drivers of cost. To learn about mapping your route and other factors that affect house moving costs, go to the next page. 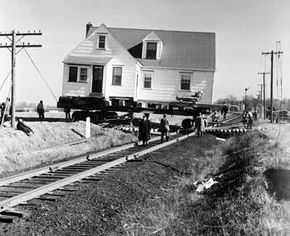 Moving a house over obstacles such as railroad tracks can add significantly to the costs.
Retrofile/Hulton Archive/Getty Images

One of the most important factors in house moving is how you intend to get the home from Point A to Point B. A house mover's equipment can pick up any house, no matter how heavy or large, but if the path to the new lot is littered with obstructions such as trees, mailboxes, curvy roads that require hairpin turns, railroad crossings, overpasses or utility lines, then there's only so much that can be feasibly done. Longer journeys will only increase the number of obstacles, and you must work with each of the cities or towns through which the home will pass for moving permits. Some areas also have road restrictions and require that home moves be done only during nighttime or weekend hours.

Some of these barriers are surmountable with some legwork. For example, if you coordinate with homeowners along the route, you can remove and replace mailboxes along the route as you go. Some trees and bushes can be pruned back. But any home taller than one story is going to get caught in utility wires. Utility companies will raise the wires for you, but this service comes at a price and is often one of the largest expenses associated with moving a house. Larger homes can be cut into pieces, but they must be structurally strong, and this also adds to the price.

For these reasons, the cheapest homes to move are those that are small and have a short, clear route to travel. If your home is larger, or if the route is long and tricky, you have to decide at what point the expense of moving the home is greater than the value of a home. On the densely populated East Coast, moves are usually within the same town because it's too complicated and expensive to go further. In areas that are more spread out, such as the Midwest and the West, it's possible to go hundreds of miles [source: Lewis]. Cross-country moves are difficult financially and logistically as they usually require disassembly of the home, in addition to meeting a wide variety of road regulations.

The cost of moving a house starts at about $12 to $16 per square foot but can quickly rise if the home is heavier, bigger or has farther to go [sources: McLinden, Burstein]. One house builder estimates that moving a large home more than just a few miles can run about $150,000 to $200,000 [source: Fetters]. In addition to the costs of the actual moving, these expenses should also be considered:

If you're still determined to relocate your house, it's time to start digging. Learn about the steps involved in this feat of engineering and logistics on the next page. 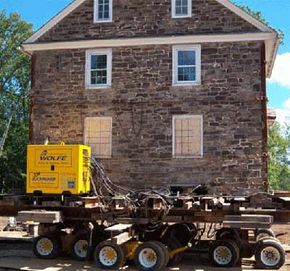 On the left is the jacking system that keeps the house level, while under the house are the steel beams and dollies that will take the house to its new home.
Photo courtesy Wolfe House & Building Movers

To prepare the house for a move, all the utilities must be disconnected, which may require the services of a plumber or an electrician. In addition, house movers need at least 10 feet (3 meters) of room around the house for excavation, so dig out any trees or plants that you don't want bulldozed [source: Expert House Movers]. The mover will dig down around the foundation and cut openings in the foundation walls.

Steel beams are inserted into these openings. These beams bear the weight of the house during the move, so it's important that they're sized and placed correctly. Wooden cribs, made out of interlocking wooden posts, also help support the home inside and out. Then home movers place hydraulic jacks under the steel beams; the jacks will provide the movement that will lift the house. You may have seen a hydraulic jack used to prop up the tire of a car, but these jacks are linked to work together. This system is known as a unified hydraulic jacking system because there's a central control for monitoring each jack's performance. Because they're unified, all the jacks rise and lower at the exact same rate, regardless of how much weight each jack is supporting. This allows the home to remain level.

When the house is lifted, sliding beams are placed underneath to pull the home onto special dollies with rubber tires. The dollies are then attached to a truck that will take the house to its new location. This arduous trek can last several days. The truck crawls along while crews of workers travel alongside, lifting wires and mailboxes, and then replacing them after the house has passed. One bright side, though, is that most furniture can remain in the house, and the contents are barely affected. House movers have anecdotes of open soda cans left in a house arriving without spilling a drop [source: Siegal], while sleeping cats have made it to their new destination without waking up [source: Ermann].

When the home arrives at its new location, it's left jacked up until a new foundation is poured. Then the home is lowered, and the utilities that were uninstalled at the old place can be put back in. When all these steps are done correctly, the house has the same structural integrity as when the process started.

To learn more about moving home sweet home, see the links on the next page.

Some homes are made to be moved, like trailers and prefabricated houses, but surprisingly they require no less preparation. Mobile homes are also jacked up, and axles and wheels are attached to the bottom of steel beams that are already running through the home. A tongue (or pole) is usually already installed under the home, and this is attached to the truck that will pull the home. If you've ever been stuck in traffic behind a trailer that's being moved, you know that it goes very slowly; drivers have to keep control of the load, and the home could sustain damage if the driver screeched to a sudden stop at high speeds. Permits are required for using the road and are available from local planning offices. Doublewide or triplewide homes face about double or triple the cost because there are more units to transport, and the pieces must be put back together at the end.