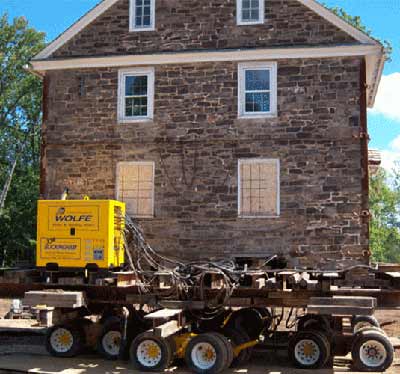 On the left is the jacking system that keeps the house level, while under the house are the steel beams and dollies that will take the house to its new home.
Photo courtesy Wolfe House & Building Movers

To prepare the house for a move, all the utilities must be disconnected, which may require the services of a plumber or an electrician. In addition, house movers need at least 10 feet (3 meters) of room around the house for excavation, so dig out any trees or plants that you don't want bulldozed [source: Expert House Movers]. The mover will dig down around the foundation and cut openings in the foundation walls.

Steel beams are inserted into these openings. These beams bear the weight of the house during the move, so it's important that they're sized and placed correctly. Wooden cribs, made out of interlocking wooden posts, also help support the home inside and out. Then home movers place hydraulic jacks under the steel beams; the jacks will provide the movement that will lift the house. You may have seen a hydraulic jack used to prop up the tire of a car, but these jacks are linked to work together. This system is known as a unified hydraulic jacking system because there's a central control for monitoring each jack's performance. Because they're unified, all the jacks rise and lower at the exact same rate, regardless of how much weight each jack is supporting. This allows the home to remain level.

When the house is lifted, sliding beams are placed underneath to pull the home onto special dollies with rubber tires. The dollies are then attached to a truck that will take the house to its new location. This arduous trek can last several days. The truck crawls along while crews of workers travel alongside, lifting wires and mailboxes, and then replacing them after the house has passed. One bright side, though, is that most furniture can remain in the house, and the contents are barely affected. House movers have anecdotes of open soda cans left in a house arriving without spilling a drop [source: Siegal], while sleeping cats have made it to their new destination without waking up [source: Ermann].

When the home arrives at its new location, it's left jacked up until a new foundation is poured. Then the home is lowered, and the utilities that were uninstalled at the old place can be put back in. When all these steps are done correctly, the house has the same structural integrity as when the process started.

To learn more about moving home sweet home, see the links below.

Some homes are made to be moved, like trailers and prefabricated houses, but surprisingly they require no less preparation. Mobile homes are also jacked up, and axles and wheels are attached to the bottom of steel beams that are already running through the home. A tongue (or pole) is usually already installed under the home, and this is attached to the truck that will pull the home. If you've ever been stuck in traffic behind a trailer that's being moved, you know that it goes very slowly; drivers have to keep control of the load, and the home could sustain damage if the driver screeched to a sudden stop at high speeds. Permits are required for using the road and are available from local planning offices. Doublewide or triplewide homes face about double or triple the cost because there are more units to transport, and the pieces must be put back together at the end.

There used to be a feature in American History magazine called "Save this Old Barn." The magazine would include a photo of the barn, which was usually beautiful, and a bit about the history of the structure. The price was usually a dollar, but the buyer was responsible for moving the barn. I thought these barns were great deals and I wondered why more people weren't snapping up one-dollar barns -- and then I wrote this article.

Turns out that the dollar price tag is the only thing that will come cheap and easy in the course of moving a building. There's a ton of logistical planning to do, and the move itself can cost hundreds of thousands of dollars, forcing me to abandon my plan of bringing a historic old silo from Nebraska to Atlanta in my quest to have the coolest house on the block. Still, there are plenty of people out there who might need to move a building, and it's not as if buying a house and keeping it in its current location is very cheap, either. If you're looking to move a home, this article is a good place to start.

For further reading, see these articles!