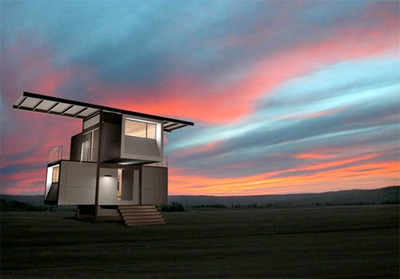 The energy gathered from the PV panels on top of the zeroHouse is stored in batteries so that the house keeps running after sunset and after several cloudy days.
Specht Harpman

Perhaps the most amazing thing about the zeroHouse design is that it relies solely on solar energy to run all its necessary functions. It harnesses the energy of sunlight with photovoltaic (PV) arrays and solar hot water panels mounted on top of the house. These arrays and panels incorporate solar cells, much like those on a solar-powered calculator. Sunlight comes down to earth in capsules -- what scientists call photons. These photons contain energy, and it's the job of solar cells to convert that energy into usable electricity.

When photons hit the semiconductor material of solar cells, the energy of the photons breaks electrons from their atoms. This creates a flow of electrons, or an electric current. The PV array system on top of the zeroHouse can use this electric current as electricity for whatever power needs the inhabitants have -- such as the built-in TV and refrigerator. The house need not rely on power plants that use fossil fuels and emit greenhouse gases to produce energy. Incidentally, this solar power also makes the house perfectly suited for remote geographic locations where there are no power lines. The architect touts the PV arrays on the zeroHouse as incredibly durable. They don't lose efficiency even after heavy use.

Because the house relies on sunlight for its energy, you might be wondering what happens when the sun is not shining. Why don't the TV and the refrigerator shut off at night or even on a cloudy day? Batteries can store a certain amount of the solar energy so that the zeroHouse has enough power to run even without the bright sun. The architect claims that the house saves enough solar energy after being fully charged to run for up to a week without sun.

Despite the fact that the PV panels can produce adequate energy, it's still important to keep the house's energy consumption low. To conserve energy, the architects have incorporated several features into the design, not the least of which is the insulation. We'll discuss those features on the next page.

A Little Something Extra

In certain climates, it isn't unlikely that the PV panels of the zeroHouse will generate more energy than the house needs. When this happens, the inhabitants can divert the extra energy to help power their hybrid car.