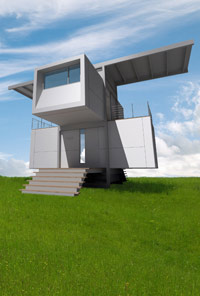 The rainwater collection system on top of the zeroHouse uses gravity to provide water to the inhabitants.
Specht Harpman

In addition to its power system and insulation material, the zeroHouse's design also incorporates green technology for both its water consumption and its waste output. In keeping with the mission of resource conservation and location versatility, the zeroHouse has a cistern on its roof to collect rainwater. The cistern is able to hold up to 22,000 gallons of water. This way, without a connection to a water source, the house can collect and save water for use. The system even includes two filtering mechanisms that work to clean the water and make it drinkable. Another water conservation tool the house incorporates is a low-flush toilet. These kinds of toilets use less water to perform the same flushing functions as traditional toilets.

The plumbing system relies on the forces of gravity to keep the water flowing in the house. As an accessible and free source of energy, gravity is an ideal "green" power source. The force of gravity drives the water through low pressure water fixtures to provide the house with water [source: West]. Using gravity allows the house to avoid using electricity to power water pumps.

The zeroHouse is resourceful with its trash as well. The U.S. throws away over 200 million tons of solid waste every year, and over half ends up in landfills [source: EPA]. Green technology attempts to provide new ways to keep the environment clean by reducing our waste. In this vein, the designers of the zeroHouse believe that trash is a terrible thing to waste. So, they incorporated a compost unit underneath the zeroHouse to collect waste.

Compost units break down organic waste into usable fertilizer. Like all compost units, the one under zeroHouse works by harnessing the natural processes of bacteria by exposing this waste to the proper amounts of soil, water, and oxygen. The soil contributes microorganisms, which are the mechanisms that drive the process. Microorganisms, which include bacteria, feast on the trash in the pile, which effectively breaks down the material. Water and oxygen need to be part of the equation to help the microorganisms thrive and do their work.

The compost unit under the zeroHouse converts organic waste into fertilizer. The architect claims that, under normal usage, this unit need only be emptied twice a year.

This house is not just efficient, it's smart. Learn about the house's brain and its bone structure on the next page.

Taking Out the Trash

Although compost units are known for emitting an unpleasant smell, the one under the zeroHouse is sealed in a special rotating compartment and ventilated through the roof to prevent unpleasant odors from leaking into the living areas. In addition, this compost unit is largely maintenance-free, forming compost bricks that only need to be taken out every six months [source: West]