How much money can you save by gardening? 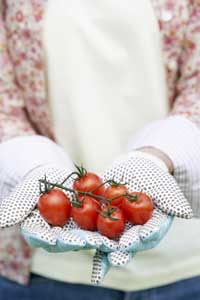 The price per pound for growing your own tomatoes is around 25 cents, compared to $1.77 at the store.
Noel Hendrickson/Getty Images

Starting a garden in your yard isn't free, but it certainly outweighs the growing costs of retail produce. For example, take the tomato, which is the most popular vegetable to grow at home. Four tomato plants would run you about $15. The average yield for a row of about four plants is 60 pounds (27 kilograms) [source: Iowa State University]. According to the Bureau of Labor Statistics, the going retail price per pound for tomatoes is $1.77, while yours only cost about 25 cents.

You'll save even more with bell peppers. With a $12 investment in six plants, you can reap up to 120 pounds (54 kilograms) of peppers [source: Iowa State University]. That lowers the price per pound from $2.37 in stores to 10 cents. Easy-to-grow broccoli also costs less than a third of the retail price per pound, at around 50 cents rather than $1.37.

With the right resources, you can satisfy all of your vegetable needs in your backyard. As we saw with tomatoes, growing your own vegetables has a significant cost-savings benefit as well. However, you would have to follow a purely vegetarian regimen if you want to completely duck the rising food prices because many people's food bills contain items other than fruits and veggies. And while home grown vegetables are better for your bank account, the food group worst hit from pricier fuel is dairy. The USDA has projected a 3.5 percent to 4.5 percent price increase in fruits and vegetables, while it expects dairy to inflate up to 6 percent and eggs to go up 10 percent [source: USDA].

Along with high food prices, people have started growing their own produce because of quality control and environmental concerns. Although no one tracks the exact number of vegetable gardeners in the United States, gardening organizations and stores have consistently reported an increase in activity in the past couple of years.

As the urban landscape has changed since the early days of victory gardens, so have some of the ways that people are pinching pennies and growing their own fruits and vegetables. Read about modern victory gardening techniques on the next page.