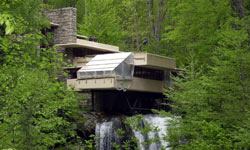 Many say the pioneer of green design was the irascible Frank Lloyd Wright, whose innovative organic architecture philosophy focused on creating structures that appeared to be part of their surroundings. But others refute this, noting sustainable architecture has been around forever. Or, at the very least, its principles are ancient. Just think of the famous Roman aqueducts, many of which are still used today. The gravity-driven structures not only distributed water and took away waste, but provided renewable water power for mines, forges and mills. And when the ancient Greeks began running low on fuel sources, they began positioning buildings and even entire cities to catch the sun's rays [source: WebEcoist].

No matter when sustainable architecture began, most will agree that today it's in the forefront of our collective minds, for both our homes and places of business. The government's getting in on it, too, with building codes regarding energy efficiency and carbon footprints becoming increasingly stringent. This means everyone involved in construction has to be a little more creative, a little more thoughtful, a little nimbler. Especially the architects and designers, who kick-start the process.

So which architects, past and present, are considered tops in the green game? That's constantly evolving, as more and more designers are attracted to the field. But here are 10 whose contributions can't be denied.