by Melanie Radzicki McManus
Prev NEXT
3 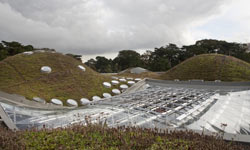 Italian architect Renzo Piano is widely considered one of the most influential green architects today. Yet he doesn't let environmental considerations limit his ideas by forcing him to consider only stereotypical green building shapes or materials or components. Instead, he lets his imagination fly, then incorporates eco-friendly elements into the resulting structures [source: Green Architects].

One of Piano's more acclaimed buildings is the California Academy of Sciences in San Francisco's Golden Gate Park. The museum houses an aquarium, planetarium and natural history museum, and appears as though it's tucked into two hills, which, in reality, are the building's 2.5-acre green, "living" roof that absorbs up to 2 million gallons (7.6 million liters) of rainwater annually. The building also has no air conditioning, relying on weather sensors that communicate with motorized windows to open and close at select times so the museum can be entirely cooled with outside air [source: Alter].

As of this writing, Piano was working on the Stavros Niarchos Foundation Cultural Center in Athens, Greece, which -- by the time it's completed in 2015 -- will sport a green roof and, hopefully, will attain a platinum LEED certification, the highest-level sustainable building award currently achievable [source: Meinhold].