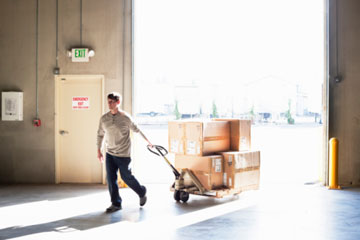 When a building calls for large doorways to be open at all times, it's sometimes necessary to install an air curtain to save on energy costs.
Jetta Productions/Iconica/Getty Images

In 1888, Theophilus van Kannel patented the revolving door, an invention he claimed would prevent "noxious effluvia" and "baleful miasmas" from entering a building when someone like the postman came and went [source: Guardian.co.uk]. Conveniently, the revolving door also eliminated the need for one person to hold a door open for another (legend has it that Van Kannel had grown tired of opening doors for his traditionally-minded wife).

But the revolving door wasn't the only thing van Kannel invented for the purpose of keeping cold air and pollutants out of buildings. His sophomore inventing effort was the air curtain, which he patented in 1904 and which was eventually installed for the first time in a building in 1916 [source: Miniveil.com]. To put it simply, an air curtain is a continuous stream of air blown from the top to the bottom of an open doorway. Commonly used as a second line of defense inside a closed door or to replace hanging plastic flaps in an open doorway, air curtains form a barrier that people and products can flow across, but air can't. This means that the climate on one side of the air curtain doesn't shake hands with the climate on the other.

The air curtain does two things: First, it insulates, and we all know the insulating power of air. It's the layer of air trapped between double-pane windows that keeps heat from moving across them. (What? Did you think it was the doubled thickness of the glass?) Secondly, an air curtain used as backup inside a door can be angled to blow outside air back out from whence it came.

Though an invisible curtain of air may sound like a Star Trek approach to Enterprise efficiency, if installed and used correctly, an air curtain can increase energy efficiency and keep pollutants and insects out of an open doorway. 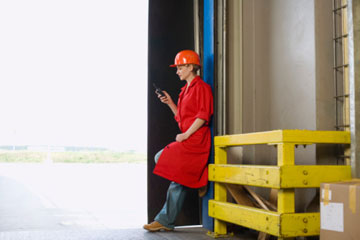 The air curtain is installed inside the doorway, and air blows down toward the floor, sometimes at a slight angle outward.
Jupiterimages/Getty Images

There are two ways to use an air curtain. You can use it in an open doorway, in which case a stream of air runs continuously. You've probably felt the puff of air from this type of air curtain when you've entered a big-box, warehouse-style store. Or, you can use the air curtain as a second line of defense behind a closed door, in which case the air curtain is activated only when the door opens. It springs into action, blasting air for a couple seconds until the door is again closed.

In both cases, the curtain is mounted on the heated/air-conditioned side of the doorway, extending across the length of the door opening. Its intake sucks in conditioned air and blasts that air either straight down or at a slightly outward-tilted angle (see more on next page) to push away any outside air that otherwise would enter through the doorway.

An air curtain can be augmented with an electric heater. Imagine walking into a building on a freezing winter day to feel a cascade of heated air. And speaking of heat, because hot air tends to pool by the rafters, an air curtain also helps re-circulate that heated air. The current of air is also strong enough to fend off flying insects, dust, pollution and any other unwanted contaminants [source: AirDistributors.com]. In fact, some businesses use air curtains for the purpose of keeping airborne contaminants from sneaking into sterile spaces. And curtains can even be used to guard open ovens and freezers.

The Physics of Air Curtains

Imagine rolling two balls at each other for a head-on collision. After they hit, which way they roll depends on a simple law of physics: F=MV2, or "force equals mass times velocity (squared)." This means that a small ball rolling fast can potentially overpower a large ball rolling slowly.

The other thing to take into account is the direction of that velocity. You might think that an air curtain would most effectively fight horizontal winds with its own horizontal winds. But that's not really the case. When air is blown directly out the door for a head-on collision with other air (like those two balls we mentioned above), much of the power of the air is lost over distance. Instead, air curtains direct their flow of air mostly downward toward the floor of the doorway. The system must blow hard enough to ensure the air is still traveling at the needed velocity as it reaches the bottom of the doorway, and that the velocity is also stronger than the velocity of the outside, inrushing air. As such, the curtain acts like a wall that outside air comes toward and then bounces off of.

To give you an example: If wind were blowing horizontally toward the door at 20 feet per second (13.6 mph/21.2 kph), an air curtain angled outward at 15 degrees would have to blow 133 feet per second (91 mph/146.4 kph) to counteract the force of the outside air.

All of this means that you'll need to play with your air curtain to get its force just right -- at just the right speed and angle to most efficiently counteract the force of the inrushing air. You can tweak your air curtain three ways: Either crank up the volume of air blown, the speed of the air blown, or direct this velocity outward a bit, usually at an angle of between 10 and 20 degrees [source: PoweredAire.com].

Theophilus van Kannel, inventor of the air curtain and the revolving door, also was the great mind behind the Witching Waves, an amusement park ride built at Coney Island, N.Y., in 1907.

The Cost/Benefit of Air Curtains

Like many economic questions, the one of air curtain cost-benefit depends on a number of variables. A small, unheated 36-inch (91.4-centimeter) air curtain can cost as little as $200 [source: Amazon]. On the other hand, a high velocity, heated curtain for a 9-foot by 14-foot (2.7-meter by 4.2-meter) door can run almost $450 [source: Grainger.com]. So, just like tilting and powering your air curtain to do what's needed and no more, the first trick in air curtain economics is to pay for only what you need. The size should be a no-brainer: Measure your door. Next, decide if comfort or efficiency is your end goal -- if it's comfort, go heated; if not, consider an unheated model. Finally, estimate the force your air curtain will need to counteract the force of outside air. For example, if you're fighting a windy Minnesota winter, you'll need more air at a higher speed than you'd need in an area with a milder climate and no wind.

The other benefit of air curtains is that they can help a structure earn Energy and Atmosphere points, Indoor Air Quality points, Innovation in Design points, and Indoor Environmental Quality points, all of which add up to the Leadership in Energy and Environmental Design (LEED) certification [source: Air Conditioning, Heating and Refrigeration News].

If you want to know your energy savings beyond the initial outlays, you'll have to take into account things like wind speed and energy costs. Berner International and Mars Air Systems, suppliers of air curtains, include calculators on their sites that can help estimate the costs and savings of air curtains over time. For example, an air door that costs $3,000, installed on an 8-foot by 6-foot (2.4-meter by 1.8-meter) doorway with an average outside temperature of 50 degrees Fahrenheit (10 degrees Celsius) and wind speed of 8 miles per hour (12.8 kilometers per hour) will pay for itself in almost exactly a year.

I admit it: I'd never heard of an air curtain before writing this article. But now that my consciousness is raised, I see them everywhere. "Oh, is that what that blast of hot air is every time I walk inside the local supermarket?" I think. And there's another at the dentist's office. It turns out there's been a silent revolution in entrance gasket technology going on all around us, every day, unnoticed. Join the revolution or be left in the cold, inefficient dust.

How Stamped Concrete Works
Which is more important in green construction: materials or tech?
Are green homes more expensive to insure?