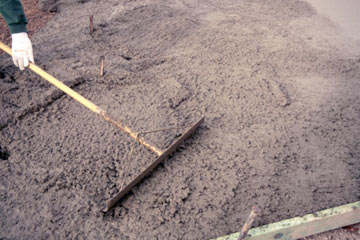 In an ironic twist, coal is responsible for the emergence of fly ash concrete, a green building material that could help curb carbon emissions in the construction industry. See more home construction pictures.
iStockphoto/Thinkstock

Fly ash is produced when coal is burned, and environmental laws in the United States require power companies to trap and properly dispose of it. Disposal presents a challenge because of the sheer amount of coal ash produced by coal-fired power plants, and also because the heavy metals in coal make fly ash a potentially dangerous substance. Coal plants in the U.S. don't exactly have the cleanest track record in dealing with coal ash disposal, either, as several major coal ash spills have been reported in recent years.

To deal with both of those problems, the construction industry had the clever idea to start formulating concrete out of fly ash, substituting fly ash for Portland cement (the primary ingredient in most concrete). Surprisingly, fly ash has several characteristics that make it a perfect ingredient for concrete: It has great strength and durability (although we're still waiting to see how it performs long-term), and of course, it's cheap. And because it's a recycled material, it helps to prevent concrete companies from unnecessarily mining for other materials to make concrete.

Everybody wins, right? In many ways, fly ash concrete does look like a winner, but there are still some lingering concerns about the safety of surrounding ourselves with too much fly ash. Coal is a material that's full of harmful substances, and there are still some questions about whether heavy metals would be able to leach from concrete made with coal ash. Concerns have also been raised over whether using fly ash would expose builders to lawsuits and exempt them from insurance coverage. Continue reading to learn more about how fly ash concrete is made, and to figure out if it is indeed safe.

What is fly ash?

In America, more than 50 percent of our electricity comes from coal-fired power plants, where coal is ground into a fine powder, placed in a boiler, and burned at very high temperatures. The heat from the boiler produces steam, which is used to spin a turbine and produce electricity. Burning coal is a very dirty process, but modern coal plants have pollution-control equipment that prevents all of the particulate matter from leaving smokestacks. When that equipment is cleaned, we're left with coal ash [source: Dewan].

Because coal power is so widely used, fly ash is one of the most abundant industrial byproducts on Earth. So instead of putting it in storage ponds that are just waiting to spill, it makes sense for companies to put it to good use as a construction material. Not only does using fly ash in concrete prevent those heavy metals from being released back into the environment, it also keeps cement makers from mining new raw materials.

As you might expect, coal ash is a cocktail of toxic chemicals -- it contains the same heavy metals that are found in coal, only in higher concentrations. Fly ash typically contains heavy metals like arsenic, lead and selenium that are known to cause cancer and other health problems. Because of the known risks, environmentalists have long fought to have fly ash categorized as a hazardous material, but they have faced stiff resistance from the energy industry, and now the construction industry.

Because it contains heavy metals, storing and safely disposing of fly ash presents a major challenge to power companies. It's typically mixed with water and stored in ash ponds that can be exposed to storms and cause spills. There are currently about 600 coal ash sites in 35 states across the country, and many of them have experienced spills in recent years [source: Merchant]. The biggest fly ash spill in U.S. history took place in 2008 at the Kingston Fossil Plant, which is about 40 miles west of Knoxville, Tenn. There, about a billion gallons of fly ash sludge and water were released into the surrounding land and waterways in an environmental catastrophe [source: Living on Earth].

One potential solution to the storage and disposal problem that could help prevent spills like the one in Tennessee is to use fly ash as a building material. When used in concrete, fly ash is generally believed to be fairly safe. Although it often does contain known carcinogens, the harmful effects are thought to be neutralized when fly ash is added to concrete mixes.

How Fly Ash Is Used 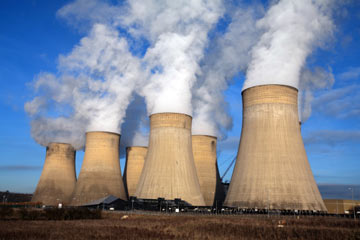 More than 50 percent of our electricity comes from coal-fired power plants. When that equipment is cleaned, we're left with coal ash.
iStockphoto/Thinkstock

Geopolymer concrete is the technical name for fly ash or any other type of concrete made from synthetic aluminosilicate materials (materials made with aluminum, silicon and oxygen). When fly ash is added to a cement mixture, it isn't just filler, it actually reacts with the other compounds that are in Portland cement and becomes part of the matrix. It's rich in alumina and silicate, which causes it to react with alkaline solutions to produce a binding aluminosilicate gel. The resulting product is an excellent substitute for the traditional ordinary Portland cement [source: van Riessen].

Today, concrete mixes in which up to 25 percent of the cement is replaced with fly ash are common, and some concrete makers are replacing as much as 50 percent. But higher concentrations of fly ash require increased testing, because the results can vary.

From a builder's standpoint, the most important thing about fly ash concrete is its performance, and it doesn't disappoint. Adding fly ash to the mix has the ability to improve concrete, because changing the composition of concrete can add strength and durability. The resulting material is less porous than typical Portland cement, and it's more resistant to corrosion and premature deterioration [source: Ideker]. In addition to being more durable than ordinary Portland cement, fly ash concrete is more acid- and fire-resistant, and it demonstrated higher compressive and tensile (stretching) strength.

In many ways, fly ash concrete is the ultimate paradox. Fly ash comes from one of the biggest sources of air pollution and carbon dioxide emissions on Earth, and yet it's considered to be a green material. What's the deal? The main reason that fly ash is considered to be eco-friendly when used in construction is because it's a recycled material. If power companies are going to burn coal and produce fly ash anyway, it makes sense to put it to good use, especially if it can save money and energy in the construction sector.

Making cement from scratch is a very energy-intensive process. Conservative estimates say that concrete production contributes between 5 and 8 percent of greenhouse gas emissions worldwide, but it could be even higher. We currently produce more than 2.6 billion tons of Portland cement per year, and that number figures to increase as populations climb, unless some greener option emerges to supersede it.

That's where fly ash concrete comes in. Fly ash concrete has the ability to simultaneously curb global carbon emissions while developing better and more durable infrastructure that wouldn't need to be rebuilt as often. In fact, one study even noted that fly ash bricks also have the ability to store carbon dioxide from the environment, adding another green benefit [source: Liu].

The U.S. Green Building Council seems to agree about fly ash's green cred; the preeminent arbiter of all matters relating to green building issues, Leadership in Energy and Environmental Design (LEED), credits substituting fly ash concrete for at least 40 percent of ordinary Portland cement [source: Portland Cement Association]. A life-cycle assessment, which is an analysis of every stage of production from cradle to grave, shows that replacing ordinary Portland cement with fly ash concrete can decrease carbon emissions by as much as 90 percent. That's largely because fly ash is a recycled material, and replacing new Portland cement with fly ash prevents unnecessary carbon dioxide emissions, and because it's more durable it doesn't need to be torn up and replaced as often [source: Salton].

Of course, fly ash isn't without controversy. Because fly ash is a byproduct of coal, which itself is full of heavy metals and toxins that can be dangerous, concern has been raised that buildings made from fly ash concrete could be harmful to people.

The biggest challenge to fly ash came in 2008, following the massive fly ash spill at the Kingston Fossil Plant in Tennessee (see sidebar). Then, a few weeks later, there was another smaller fly ash spill in Alabama that kept fly ash in the news. Those spills and the resulting cleanup and news coverage put fly ash on the Environmental Protection Agency's (EPA) radar and prompted environmental activists to call for tougher regulations. Since then, the EPA has been weighing whether or not to classify fly ash as hazardous waste, and although the agency has stated that such a classification wouldn't affect fly ash that's used to make concrete, observers from the construction industry have been skeptical [source: Purdy].

But is it really safe to live in a building that's made of coal? The safety of fly ash in concrete has been hotly debated. While geopolymer concrete has been proven to leach dangerous elements like arsenic, chromium and selenium, at least one study has shown that adding calcium can help reduce the leachability of heavy metals [source: Sanusi]. However, many questions still remain about what will happen to the heavy metals and other substances in fly ash once the concrete breaks down and is disposed of [source: Post].

The concrete industry is worried that even a hybrid law that classifies only stored fly ash as a hazardous material would still stigmatize fly ash concrete, placing it on a similar level as asbestos or lead paint. Even if it's safe in concrete applications, hazardous classification for fly ash could potentially make construction companies more vulnerable to lawsuits.

In December, 2008, a dike failed at the TVA Kingston Fossil Plant in Roane County, Tenn., releasing more than 5.4 million cubic yards of fly ash from the on-site landfill. The spill covered more than 300 acres of land and water. The Tennessee Department of Environment and Conservation and the Environmental Protection Agency have been working ever since to clean up the affected areas.

I've written quite a bit about green buildings and construction over the years, but I'll admit that when I saw the words "fly ash" on the screen when I received this assignment, I drew a blank. I'm interested to see what will happen with this stuff. For now, concrete seems like a perfectly good use for fly ash, but in a best case scenario, we'll continue to wean ourselves off coal to the point where fly ash disposal isn't as much of an issue.

10 Green Countertops
Is your drywall making you sick?
How Carbon Negative Cement Works