by John Kelly
NEXT PAGE 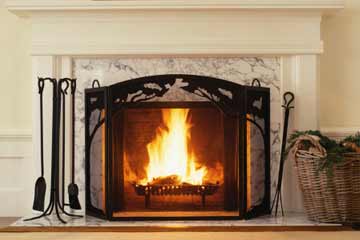 Fireplaces are often desired more for their aesthetic value and ambiance in homes than they are for their heating abilities.
Maura McEvoy/Getty Images

Do you love sitting by a fireplace? Does a crackling fire define a home to you? If so, you're not alone. In a survey conducted by the National Association of Home Builders, 77 percent of home buyers said they wanted a fireplace in the family room [source: Fireplaces.com].

The indoor fireplace is a technology that dates from the Middle Ages, when people in medieval castles and homes used them for warmth. However, traditional fireplaces today are desired more for their aesthetics than to be used as effective heating appliances.

Even as far back the 18th century, Benjamin Franklin noted that "the strongest heat from the fire, which is upwards, goes directly up the chimney and is lost" [source: Carlsen]. And Franklin was right. The standard fireplace is among the most inefficient heating devices you can operate. In fact, it can be so inefficient that in some cases it actually makes your house colder.

Inefficiency is not their only drawback. In addition to the risk of setting the house on fire, the smoke that ends up inside your home can contain harmful chemicals, which is a problem in tightly sealed modern homes. And although many modern fireplaces use renewable fuel, they're not considered completely "green," because they can add to air pollution.

But it's not all bad news for fireplaces. Improvements have given fireplace fans a range of more attractive alternatives. Better designs provide more heat, less waste and safer operation. If you're willing to give up the smell and glow of burning wood, a direct-vent, gas-powered fireplace can be an efficient heat source that may even save you money on fuel.

In this article, we'll look at how a fireplace works and how to operate it safely. We'll also consider some innovations that allow you to have a fireplace without a chimney, on your patio or on the coffee table in your living room.