Why Do We Traditionally Clean Our Homes At the Beginning of Spring?

by Josh Clark
Get out your cleaning gear. It's time to do some serious spring cleaning. © Frank May/dpa/Corbis

­It feels ­almost like a biological imperative. The sun takes a little longer in its descent below the horizon and the chill of winter begins to leave the bones. Without much thought on your part, the couch is moved from its place so you can sweep beneath it and the drapes are suddenly in the washing machine. Disinfectant sprays suddenly attract a ne­w level of interest and you decide your sponges must all be replaced. You've awakened from the long winter quasi-hibernation that kept you glued to the television. Now it's time to thoroughly rid your home of the dirt and dust and dog hair that have accumulated over the long, dark season. You've been gripped by the urge to spring clean.

­You're certainly not alone in this strange desire to clean your house. Spring cleaning has become nearly ritualized in the West. Makers of cleaning products ramp up advertising late in the winter. Internet sites and magazines become awash in spring cleaning tips. Public service campaigns for everything from properly disposing of outdated pharmaceuticals in America to removing litter from t­he Irish countryside are attached to spring cleaning each year. It's kind of an unconscious, collective movement.

Spring cleaning isn't for everyone, though. Using fMRI scans, researchers have determined that when confronted with a decision to throw out possessions -- even junk mail -- people who've been diagnosed as compulsive hoarders show activity in the same region of the brain that's responsible for processing damaging and unpleasant experiences [source: New England Hoarding Consortium]. An estimated one to two percent of the population in the United States are compulsive hoarders, who accumulate and refuse to throw out large collections of everything from newspapers to paper clips.

For people who don't have a hoarding compulsion, spring cleaning seems almost compulsive in itself. The sense of cleanliness and accomplishment that comes from scouring the house also brings something like a neurological reward from the brain. There isn't any documented medical evidence that spring cleaning is a compulsion; rather, it seems to be rooted in tradition more than anything else. Exactly why do we traditionally clean our homes at the beginning of spring? Those of us in the West may be surprised to find that it's possibly rooted in customs found in the East. Learn about these possible origins to spring cleaning today on the next page.

Why We Spring Clean 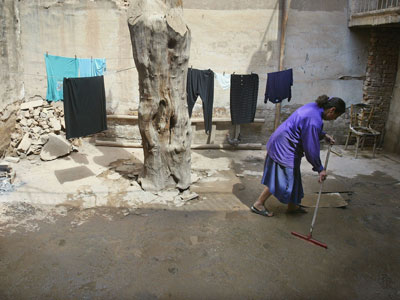 A Jewish woman in Baghdad, Iraq, washes the floors in her home in preparation for Passover.
Mario Tama/Getty Images

­The reasons behind why we spring clean are rooted in two cultures, Jewish and Iranian. A third, the Chinese, also have a similar custom. All of these traditions extend far­ back into the distant past.

In Iran, the new year arrives on March 21, the day of the vernal equinox on the solar-based calendar. Iranians' celebration of the new year lasts two weeks, and the festival's customs, rituals and symbolism are rooted in the culture's ancient pre-Islamic past [source: UNESCO]. The new year, Nowruz, is a time of regeneration for Iranians; they use symbols like burning and planting to signify renewal and optimism for a new season. It's also a time for refreshing and reinvigorating life, and that includes Iranians' houses.

While spring cleaning in the West is undertaken in a loose manner collectively, it's much more codified in Iran. The ritual, which is done sometime in the two weeks preceding Nowruz, is called khane tekani ("shaking the house"), and the custom lives up to its name. Iranians traditionally buy new clothes to wear during khane tekani. Every bit of a home is scoured and cleaned; nothing is spared. Rugs, drapes, bedding, knick-knacks, floors, ceilings -- everything gets a good cleaning. Fresh scented flowers are brought in to renew the house's vibrancy. Once the house is shaken, the new year -- and spring -- can arrive.

Next, we'll take a look at some other possible origins of spring cleaning and see how they measure up to what we do today.

In Jewish custom, Passover (Pesach) is a time of house cleaning as well. The very solemn holiday is meant to mark the exodus of the Jews from Egypt and takes place two weeks after the Jewish new year has come. Because the slaves in Egypt (including the Jews) were fed unleavened bread (bread without yeast, called "matzah" in Hebrew), the Jews adopted the bread as a symbolic reminder of the subjugation they overcame [source: History Channel]. It's a humble bread, and during Passover, keeping leavened bread (chametz), which is any bread made with yeast, is considered arrogant and ungrateful.

In fact, keeping leavened bread in the home during Passover is considered such an affront in Jewish culture that even overlooked crumbs count. To combat inadvertently insulting God, Jews scour their homes before Passover to ensure they didn't miss any bread. Since Passover comes around April, many people consider this custom as the origin of spring cleaning.

There's yet another culture, the Chinese, in the running as the originator of spring cleaning. Like Iranians, the Chinese clean their homes in anticipation of the new year (which occurs shortly after the Western new year). The Chinese sweep their floors and clean their homes to rid of bad luck and misfortune that may have accumulated during the previous year. Once the house is a clean slate, the Chinese welcome good fortune by observing a prohibition against sweeping for the few days following the new year in order to prevent sweeping away any good fortune that came with the turn of the year [source: Parker-Pope].

Ultimately, spring cleaning may have more to do with simple biology. During winter, we're exposed to less sunlight due to shorter, often dreary days. With a lack of exposure to light, the pineal gland produces melatonin -- a hormone that produces sleepiness in humans. Conversely, when we're exposed to sunlight, our bodies produce much less melatonin. It's possible that we spring clean simply because we wake up from a winter long melatonin-induced stupor and find more energy as the days grow longer when spring arrives. After all, it's easy to allow a house to get a little gross around the edges when you're sleepy.

What is in moth balls? Is it harmful to people?
How to Prioritize Daily Errands
Ultimate Guide to Clutter Control