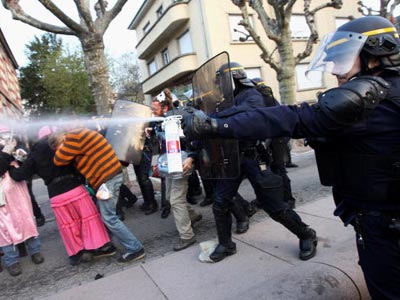 If you've ever bitten into a hot chili pepper that was just a little too spicy for you to handle, then you might know how difficult it is to get the burning sensation in your mouth to go away. The immediate pain can be unbearable, and no matter how much water you drink, it just doesn't seem stop.

Now, imagine if you felt that same burning sensation all over your face and in your eyes, nose, and throat. It would be excruciating. This is the basis behind a solution known as pepper spray. Since 1973 pepper spray has been used by law enforcement as a way to subdue violent, aggressive or uncooperative subjects. Many people also use it as a personal self-defense tool to fight off attackers.

Pepper spray is made from an extract of chili peppers and usually comes in an aerosol canister so you can spray it quickly and easily. Since it's portable and easy to use, pepper spray is a popular option for both law enforcement and personal use. When sprayed into the face of an attacker, it's extremely irritating to the skin, eyes, mouth, throat and lungs. Its effect is immediate and powerful, and it can distract a person long enough for you to escape an assailant, or for a police officer to take control of a subject.

Another reason pepper spray is so widely used is that, most of the time, exposure has no lasting effects. The immediate impact may be intense, but after a few hours, the effects should wear off completely. This makes it a generally safer option than using guns, chemical deterrents or Tasers, which in some cases can lead to permanent health problems or even death. However, some controversy still surrounds the use of pepper spray and whether or not it is truly as harmless as many people think.

So what exactly does pepper spray do to your body, and are there any ways to treat its effects? And if pepper spray is advertised as not being harmful to your health, then why is it so controversial?

What Pepper Spray Is and How It's Used

The active ingredient in pepper spray is oleoresin capsicum (OC), a natural oil found in many types of hot peppers, including cayenne peppers and other chili peppers. OC contains a compound called capsaicin, which is what's responsible for the spicy sensation when you eat a hot pepper. It's odorless, colorless, and even flavorless, but just one milligram (about 0.00003 ounces) of pure capsaicin is enough to cause blisters to form on your skin.

Pepper spray is usually dispensed from an aerosol canister. To make it easier to spray, OC oil is mixed with a water-based or oil-based solution. It's also mixed with a propellant, a solution that allows it to shoot outward, and then the entire solution is pressurized inside the canister. Using an aerosol canister allows you to spray farther -- and in many cases wider -- than other types of spray containers. There are three common spray patterns for liquid pepper spray dispensers:

Most personal pepper spray dispensers are around 4.5 inches (11.4 cm) tall and about 1.5 inches (3.8 cm) wide, with a button or trigger to release the spray, and a safety mechanism to help prevent accidents. These dispensers are small enough to be carried in a pocket or a purse and relatively light, and can dispense anywhere from one to 60 bursts of pepper spray solution.

Although pepper spray can be concealed in something as innocent as a pink lipstick tube, its effects are very serious. Continue reading to find out what happens to the body when a person is sprayed with pepper spray.

One South African bank, Absa, has equipped some of its cash machines with pepper spray to defend against criminals tampering with the machines. When a camera detects that the machine is being tampered with, pepper spray is squirted at the criminal and the police are alerted.

The Effects of Pepper Spray

When you hold a pepper in your hand, it probably doesn't feel any hotter than if you were holding an apple or a plum. But when the pepper comes into contact with your lips or your tongue, you can definitely feel the heat. This is because the capsaicin in the pepper reacts with the nerve endings in your body's mucous membranes that are sensitive to heat and cold. This explains why biting into a spicy pepper can actually feel like your mouth is burning.

Because capsaicin is the same component that makes peppers seem hot, its potency is measured in Scoville heat units (SHU) -- a heat scale used to rate the heat level of peppers. The overall heat level is based on the amount of capsaicin present. Typical pepper spray is rated between about 500,000 and 5,000,000 SHU. By comparison, a jalapeño pepper is only around 8,000 SHU, and a habanero is close to 350,000 SHU.

The severity of the effects of pepper spray varies depending upon the amount of pepper spray that's used, the strength of the spray and where it's sprayed. If sprayed directly into a person's face, the effects may be more intense or long-lasting. When pepper spray is sprayed at an attacker, the burning sensation they would feel is just the tip of the iceberg.

If you were sprayed in the face with pepper spray, you would immediately feel a burning sensation in your eyes, nose and mouth, and possibly even your throat and on your skin. This burning feeling, if left untreated, can last anywhere from 45 to 60 minutes. Your eyes would become irritated and probably swell shut, causing temporary blindness that can last from 15 to 30 minutes. You might also begin coughing and find it difficult to breathe as your throat swells -- this can last from 3 to 15 minutes.

The Maya of Central America understood the defensive power of hot peppers. During battle, the Maya would burn chili peppers, creating a smoke haze that stung the eyes of their enemies. 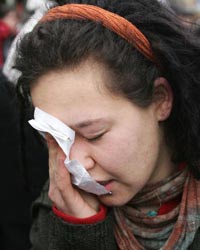 A protester recovers from a pepper spray attack outside of an employment office in Berlin, Germany.
Sean Gallup/Getty Images

Another reason for pepper spray's popularity is that in the vast majority of cases there are no lasting effects. Pepper spray is biodegradable and leaves no traces on clothing, and the burning sensation typically disappears completely within 4 to 6 hours. Most people who have been sprayed with pepper spray usually do not experience any long-term health problems as a result.

However, some studies show that certain situations involving pepper spray can result in more severe effects. For example, if a person is allergic to any of the ingredients in the pepper spray, has asthma, or has a pre-existing heart condition, then the effects of pepper spray may be more severe and in some cases may lead to death. Part of the reason pepper spray is so controversial is that there have been a number of reported deaths where pepper spray was involved. Though the use of pepper spray has never been identified as the sole cause of death in these cases, it has been listed several times as a contributing factor.

So what can you do if you've been sprayed with pepper spray? In the next section we'll explore some home remedies, as well as what doctors and emergency medical teams use to treat the effects of pepper spray. 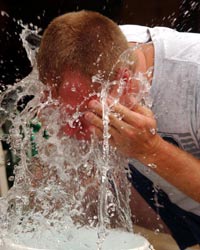 Just like grease, oleoresin capsicum oil is made of nonpolar molecules, so while drinking water or splashing your face with it may provide instant relief, it does not remove the oil or provide any lasting relief. If you're sprayed with pepper spray, there are a few things you can do:

Emergency medical technicians usually carry some form of wipes or a solution to help treat the effects of pepper spray. If you are planning on carrying pepper spray for personal use, it might be a good idea to purchase medicated wipes that are specially designed to cleanse skin if it's been exposed to pepper spray. You can usually purchase these from the same places that sell pepper spray dispensers, and they can be invaluable in case of an accidental spray.

Read on to find out more things you should know if you are considering buying or using pepper spray.

Buying Pepper Spray: What You Should Know

If you're thinking about buying or using pepper spray, there are a few things you will need to know. First, you should be aware of your local laws regarding its possession and use. For instance, some U.S. states have laws limiting where you can purchase pepper spray, the legal age of the person carrying it, the amount you can carry, the percentage of active ingredient contained in the spray, and even the types of containers in which the spray is concealed. Contact your local law enforcement office for more information about these laws, or visit your state government's Web site to find information about pepper spray laws. If you live outside the U.S., you'll need to research your national and local laws about pepper spray. For example, in Canada and Belgium it's illegal for private citizens to carry pepper spray, whereas in Hong Kong you need a permit to carry it.

You'll also want to consider the type of pepper spray you want to purchase, including its strength and the container it comes in. Do you want something that doesn't look like pepper spray -- a pen or lipstick, for instance? Do you want it to have a safety feature that makes it more difficult to accidentally spray it? How big of a container do you want to carry? Do you want a liquid, gel or foam formula? The answers to these questions depend upon your needs, and you should research more information to make sure you are getting the kind that works best for you.

If you do decide to purchase pepper spray, be sure to read and follow the instructions and pay attention to all warnings and advisories on the packaging. Aerosol canisters, for example, have temperature minimums and maximums. If the canister gets too hot or too cold, it can leak or rupture. You'll also want to pay attention to the expiration date -- most pepper spray solutions maintain their potency for about three years, but this varies by brand.

Another factor to consider is cost. Pepper spray can range in price from $10 to $50 for small, portable dispensers, though the majority cost less than $20. The range of prices takes into account a variety of factors, especially the size and type of dispenser, the number of "bursts" that can be dispensed from it, and the spray pattern it uses.

For lots more information on pepper spray and other related topics, see the links on the next page.

Pepper Spray as a Weapon of War

While pepper spray is legal in many places for law enforcement and personal use, it was banned for use in war by the 1972 Biological Weapons Convention [Source: Wright].