How to Make Your Home Handicap Accessible

Browse the article How to Make Your Home Handicap Accessible 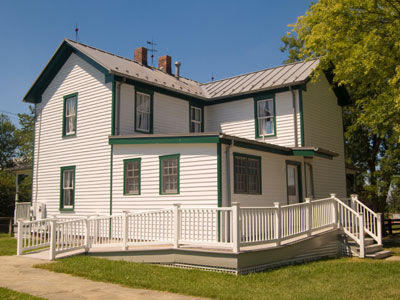 This traditional country home has been outfitted with a wheelchair ramp to make it more accessible.
© iStockphoto/cvoogt

­Randy Stow's mother, Deloros, was diagnosed with multiple sclerosis in 1965 [source: Stow]. When complications from the disease started affecting her daily life at home,­ Randy decided to use his professional experience to adapt her home to fit her ever-changing needs. That was 18 years ago. Since that time, Randy has helped many other people, dealing with diseases, injuries or simply age transform their homes into places that allow them more freedom and independence.

According to the 2000 census, nearly 50 million people in the United States have some type of disability. Of this group, 6.8 million have a condition that makes it difficult to bathe, dress and get around the inside of their own homes [source: U.S. Department of Commerce, Economics and Statistics Administration, U.S. Census Bureau].

The population is expected to increase in the number of those in the United States dealing with limitations in the coming decades. The Federal Interagency Forum on Aging Related Statistics' Older Americans 2008 report projected that by 2030, approximately 71.5 million people will be 65 and older, and the older people get, the higher the disability rates rise.

­With physical limitations affecting significant portions of the population, the issue of creating housing fit for all people has been addressed by both governmental and private organizations. While there are regulations for certain types of housing, there aren't any federal standards related to handicap accessibility for all non-federally funded, detached single-family homes. Due to the research and practicality of the federal standards, it's helpful to look at these and other guidelines for design assistance when creating a more accessible home.

In this article, we'll explore three different philosophies related to making homes more usable for all residents. We'll also look at techniques for incorporating the ideas from each of the philosophies into a single-family home.

­While each ind­ividual will have different needs and wants, there are many ways to make homes more user-friendly or accessible. First, let's look at the surrounding yard. Adding paths and raised beds or hanging plants can make a yard more accessible. Think about creating a surface that's firm and level to allow wheelchair traffic but also has traction for walkers [source: Hanchek]. Edging the paths will help keep people on them and plant life off them.

Having the ability to enter the home from the outdoors is one of the first steps to enjoying a home [source: Vance]. Most federal mandates require accessible entrances and routes to get into a building. The entry doorway should have a threshold of no more than one-half inch (approximately 13 mm) in height, and it should be sloped or rounded [source: U.S. Department of Justice, Americans with Disabilities Act].

Installing a ramp is one way to make an entry accessible. A ramp should use the least possible slope, or incline, and be at least 36 inches (approximately 915 mm) wide to accommodate a person in a wheelchair [source: U.S. Department of Justice, Americans with Disabilities Act]. Handrails and curbs to prevent people from falling or slipping off the ramp are also important. An entry area protected from wind, rain, snow or ice can further add to its safety [source: Bode].

Once inside, the overall layout of the home can make a significant impact on the convenience and usability of the home. Universal design principles recommend a bedroom, kitchen, entertainment area and a full bathroom on the main floor [source: AARP].

Now, let's move inside the house.

The Americans with Disabilities Act was enacted in 1990 [source: North Carolina State University College of Design, Center for Universal Design]. It focuses on accessibility in public spaces, businesses and public accommodations. The Fair Housing Act, originally passed in 1968 and amended in 1988, covers specifically multi-family housing units of four or more [source: Fair Housing Accessibility First]. Both have issued guidelines for complying with the acts that include specifics for everything from access routes to grab-bar requirements.­

Finding a home that meets your accessibility needs might be challenging, but there’s a certification program that might make it a bit easier. The EasyLiving Home program requires that a house incorporate certain features such as at least one step-free entrance and interior doorways with a clear passage of 32 inches (approximately 813 mm) [source: EasyLiving Home]. Final verification is done through a site visit.­

Clear paths of travel through doors and hallways are integral to providing a livable space. Many of the laws and recommendations for doors and hallways are based on the needs of those in wheelchairs. For this reason, it's important to have doors with at least a 32-inch (approximately 813-mm) wide opening. Just as on the entry door, thresholds should be rounded and no more than one-half inch (approximately 13 mm) higher than the floor [source: Bode]. High thresholds can be difficult for not only wheelchair users, but those with canes and walkers.

Hallways should be at least 36 inches (approximately 915) wide [source: U.S. Department of Justice, Americans with Disabilities Act]. If a hallway requires a wheelchair user to turn sharply, it may need to be wider.

All homes have doors and hallways, yet some have another potential limitation: stairs. To make stairs more accessible, all treads, or horizontal parts of the stairs, should be at least 11 inches (almost 28 centimeters) wide, and the edges should be rounded [source: U.S. Department of Justice, Americans with Disabilities Act]. Handrails offer added stability; it's recommended to have handrails on both sides of the stairway and for the rails to extend beyond the first and last stair [source: Bode].

Walk-in closets should have doorways of at least 32 inches (approximately 813 mm) in width, similar to doorways to other rooms [source: Fair Housing Accessibility First]. Inside the closet, adjustable rods can offer the homeowner more options for storage. Pull-down rods on hydraulic hinges allow the homeowner to store clothes high, but bring them down to a lower level easily [source: AARP].

Extra plush carpeting might seem like a great idea, but a wheelchair user can have difficulty maneuvering on it. The Americans with Disabilities Act Standards for Accessible Design recommends that pile should be no more than one-half-inch (approximately 13 mm) thick. Throw rugs aren't recommended because of their ability to shift [source: AARP].

Along with correct flooring choices, tweaks to the electrical workings in a home can offer residents more independence. Outlets should be placed at least 15 inches (381 mm) above a finished floor, while light switches and thermostats should be placed no higher than 48 inches (approximately 1,219 mm) above the floor [source: Fair Housing Accessibility First].

Finding a professional with the expertise to design, build or remodel a home to be handicap accessible might seem overwhelming. One place to start is by looking through the selection of Certified Aging-In-Place Specialists. This designation program, offered through the National Association of Home Builders, incorporates components of assessment, technical knowledge and management skills related to home modifications that will allow people to stay in their own homes safely and independently for a longer amount of time [source: National Association of Home Builders]. ­

­Replacing bathtubs with showers is one of the most common changes made. While walk-in tubs are available, a wheelchair usually can't roll into them. Showers, on the other hand, can be used for those with limited mobility as well as those in wheelchairs. A seat is recommended, and an easy fix for added versatility is installing a hand-held shower head.

For shower or sink faucets, it's a good safety precaution to set the water heater to 120 degrees Fahrenheit (48.8 degrees Celsius) to avoid scalding [source: AARP]. When choosing the type of faucet, think about lever-operated, push-type and electronically controlled options [source: U.S. Department of Justice, Americans with Disabilities Act].

To add stability, install grab bars in both the bathing area and near the toilet. Grab bars are recommended to be able to withstand 250 lbs. (approximately 113 kg) of stress and force [source: U.S. Department of Justice, Americans with Disabilities Act]. This usually requires reinforced walls.

Along with grab bars, a taller toilet can make it easier for those with limited mobility. But be sure to leave enough room around the toilet and sink for the wheelchair. In order to be able to use a sink properly, a wheelchair user needs to have 30 inches by 48 inches (approximately 762 mm by 1,219mm) of clear floor area [source: Fair Housing Accessibility First].

Clear floor space is also a consideration in the kitchen. Kitchen sinks and ranges need the same amount of clear floor area to allow a wheelchair user to roll up and use them with ease. Another accessibility idea is to install multi-level countertops with one level at a height for seated workers and another for those that are standing [source: AARP].

The kitchen appliance industry also offers more accessible design options. Since wheelchair users might not be able to reach the top freezer, a side-by-side refrigerator is a better option [source: AARP]. Ranges with front controls can be helpful for seated operators, but this could be a safety concern for homes with small children. For those with vision impairment, a range with touch or color-contrasted controls might be helpful. Finally, when everyone is ready to clean up, a raised dishwasher can reduce bending when filling [source: GE].

From roll-in showers and multi-level countertops to backyard paths and step-free entries, there are many ways for homeowners to incorporate safe measures into their homes.

Everyone has an accident occasionally, but for an older adult a fall can have dire consequences. Yet, that doesn’t mean that there aren't ways to reduce the chances of falling. Here are just a few fall prevention tips: