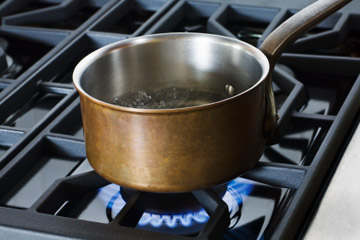 Gas and electric stoves heat only the part of the cookware that the heat touches.
©iStockphoto.com/YinYang

The principle of cooking food in a pot or pan atop a hot surface hasn't changed much since the dawn of cooking, with the cookware acting as the go-between for the heat source and the food. Its main weakness is that the heat source, be it an open fire or an electric stove, only directly heats the part of the cookware that touches it. The rest of the cookware is warmed by heat conduction and, as a result, the food receives different amounts of heat from different parts of the pot or pan. This is why we have to rely on convection to heat a stew and have to stir some foods constantly to keep them from burning in the pan.

If you've ever tried thickening condensed milk or cooking chocolate, cheesecake, custard or hollandaise sauce without a bain-marie (water bath), then you understand the risks of boiling, scorching and separation that go along with cooking this way.

Induction cooktops heat food more evenly by turning the cookware into the source of the heat. They also feature tight, precise temperature control and the capacity for very low temperature settings. Although we can't say for sure that you'll be able to throw away your double boiler or thermal circulator, there are reports of people doing exactly that [sources: Chowhound, Chow]. Induction cooktops also produce less waste heat. This is useful if you're working with sensitive, expensive food that needs to be cooked carefully and kept cold beforehand, such as langoustines or truffles, or if you want to work near the cooktop but not actually cook like you would with caviar.

An induction cooktop can do all of this because of electricity and magnetism.