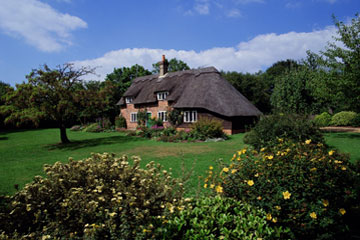 Dethatching? You may not even know that your lawn has thatch, much less that the thatch might need to be removed.

If you have a healthy, established lawn, you probably have thatch. In fact, lush lawns that get a lot of attention -- watering, fertilizing and other forms of TLC -- are prone to thatch. You just don't see it. That's not bad, unless you have too much thatch. Then your lawn will stop being healthy.

Thatch develops after you've been tending the lawn a couple of years. It's the light brown layer that builds up between the soil and the green grass. It's made up of living, dead and decaying organic matter -- compressed roots, stems and runners. Despite what many people think, grass clippings don't cause thatch. They're mostly water, so they decay rapidly.

In moderation, thatch is a good thing. It makes the turf a little springy and comfortable to walk on. It can conserve water, protect the soil and help the lawn hold up better.

But when the organic matter between the green grass and the soil builds up faster than it decays, thatch becomes a problem. It may look somewhat harmless, but it can make it harder for grass roots to take hold in the soil. Excessive thatch could also become a breeding ground for pests and disease.

You may have too much thatch if your lawn:

You can measure thatch by sticking a wire or screwdriver into several spots in your lawn. When you hit soil, measure the amount of thatch between the soil and the green grass. Or, use a knife to cut a few small wedges out of your lawn. Then measure the distance between soil and grass. If you have more than one-half inch (1.27 centimeters) of thatch, you need to get busy.

If you must dethatch, make sure you do it right. Read on for tips on dethatching.

How to Dethatch a Lawn

If you need to dethatch your lawn, you have a few options. If the lawn is small and you like exercise, you can remove thatch manually with a sturdy leaf rake, hoe or inexpensive thatching rake. Rake the built-up brown matter from under the green grass and dispose of it. You can also hire a lawn service to do the job for you.

There are some chemical products on the market that claim to dethatch, but horticulturists say they're ineffective [source: Fagerness]. Small dethatching blades are sold as lawn-mower attachments, but they're not the best choice because they put a lot of strain on the mower.

Most people rent a power dethatcher. Because these machines are expensive and dethatching is necessary infrequently, it rarely makes sense to buy one.

Dethatchers are called such names as vertical slicer, verticutter, vertical mower and power rake. Some have flat steel blades. For bluegrass and similar varieties, wire tines can work. The bladed types typically have flail (rotating) blades or fixed knife-life blades. The flail type is more commonly available. These machines are heavy. You will probably need help loading and unloading.

When you rent the dethatcher, ask for advice about how far apart and how deep to set the blades. If the rental agency can't help, check with your agricultural extension service. Settings differ according to types of grass. Generally, blades should be an inch or two (2.5 or 5 centimeters) apart for tough grasses, three inches (7.6 centimeters) or more for more delicate grasses.

You want to remove thatch that is right above the soil without tearing it up. A height of about a quarter-inch (6.35 millimeters) above the soil may work -- adjust the blades while they are on a smooth surface. They may need to be slightly higher for delicate grasses.

First, mow the grass about half as high as usual. Then make several passes across your lawn with the dethatcher, changing directions to cross previous passes.

Rake up and remove the thatch you loosen. There may be a lot: An average size lawn can yield two or three pickup truck loads. If you haven't used herbicides, the thatch can be used for mulch or compost. If you have used pesticides as recently as a month earlier, discard the thatch.

Read on to learn about why timing is so key to dethatching success.

A Few Ounces of Prevention

You can minimize thatch buildup in several ways.

When to Dethatch a Lawn and How Often 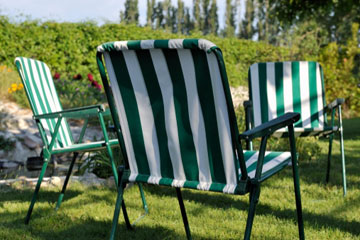 When it comes to dethatching a lawn, timing is everything.
Sami Sarkis/Getty Images

It's important to choose the right time of year to dethatch, depending upon the type of grass you have and your climate.

Dethatching is tough on a lawn, so do it when the lawn will have the best chance to recover. Don't dethatch if you're in a drought or a heat wave. Ideally, there should be about 45 days of good growing conditions after you dethatch so the grass will recover without weeds taking over. Generally, late spring and early fall are the best times, but a lot depends upon your grass and whether it grows during warm or cool weather.

Warm season grasses such as zoysia, Bermuda and buffalo shouldn't be dethatched in March or April, when a late frost will hurt new growth. Dethatching in fall will make them weak in winter. The best time in most areas is late spring or early summer, when these grasses are growing and producing new runners. Cool season grasses such as bluegrass, fescue and ryegrass are less likely to need dethatching, but if they do, the best time tends to be early fall. Reseeding may be necessary after dethatching. Bluegrass also can be dethatched in early spring after it has begun to turn green.

How often you dethatch also depends upon your type of grass, as well as growing conditions. Zoysia grass, Bermuda grass and other spreading grasses tend to produce more thatch. Tall fescue usually produces the least, with ryegrass and bluegrass in the middle of the scale. But soil that is clay, sandy, acidic or often wet and cold encourages thatch in many types of grass.

Dethatching can leave your lawn looking like a disaster area, especially if the blades dig into the soil. If your lawn produces a lot of thatch, dethatch annually, so that it's not such a big job. If the thatch is no more than a half-inch (1.27 centimeters) deep, you can probably get by with every other year. If it's as much as 1.5 inches (3.81 centimeters) deep, you might need to dethatch in spring and fall. If you have more thatch than that, think about digging up the lawn and starting over. Choose a grass that doesn't produce a lot of thatch, and tend it properly: Don't overwater or overfertilize. Encourage the spread of earthworms. Mow regularly, but not too closely. It's not easy, but you can keep thatch at bay.