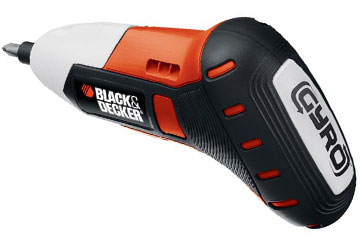 The GYRO, from Black & Decker, is the world’s first (and only, as of early 2013) motion-activated power tool. Want to learn more? Check out these must-have power tools.
Courtesy Black & Decker

Power tools are a heartless bunch. Sure, they're shiny and make splendiferous roaring sounds, but do they really understand you? It's about time that someone manufactured a power tool that really gets you, where you're coming from and where you want to go. Enter the Black & Decker GYRO, a new twist on screw driving technology.

The GYRO can't quite play psychic, but it can read your body language. Twist this powered screwdriver just a fraction of an inch in one direction and the motor instantly engages and begins driving the screw. Turn the handle the other way and GYRO immediately reverses course.

It's not that Black & Decker has discovered the secret to making mind readers out of power tools. The magic lies in the GYRO's gyroscope. A gyroscope is a device that helps maintain orientation.

You've probably used multiple products with integrated gyroscopes. When you rotate your smartphone's screen, it's a gyroscope that keeps the display rotated right-side up for easy reading. Many video game controllers (such as the remotes used for the Nintendo Wii) incorporate gyroscopes, too, so that the system can detect how hard you're swinging your virtual sword or tennis racket.

The GYRO works much the same. Twist it about a quarter of a turn and the motor kicks in. The farther you turn, the faster the variable speed motor spins the driver's head, up to 180 revolutions per minute and with a maximum torque of 42 inch pounds (48.4 kilograms force centimeter), which is enough muscle for smaller tasks.

Of course, it's not the power that's revolutionary. It's the sensing technology. All powered screwdrivers and drills will drive both forwards and backwards, but all of the others require you toggle a switch to do so. Depending on the required toggling action and the circumstances, that supposedly simple switch can be downright exasperating. With the GYRO, though, there's no switch at all. Just twist and go and the job is done.

The variable speed motor is another first. Other electric screwdrivers work primarily at one speed, which is a problem when you're working with a delicate or awkward item. With GYRO's multiple speed levels, your screwdriving chores may be much easier.

While others will surely follow suit, Black & Decker is the first company to integrate gyroscopes into power tools. Keep reading to see how engineers turned one of your toolbox's most basic implements into a new-age, gyroscopic gadget. 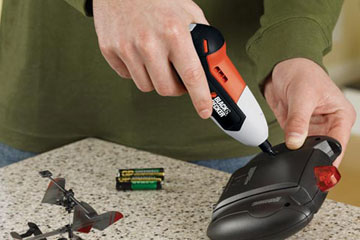 Twist just a fraction of an inch and the GYRO spins into action. Twist in the opposite direction and the GYRO immediately reverses.
Courtesy Black & Decker

Many previously established power screwdriver technologies are integrated into the GYRO. The GYRO is meant to be a lightweight, portable and compact tool that can sink its teeth into even the most inaccessible screws in your home. As such, it comes with a light-duty 4-volt Lithium-ion battery pack. Unlike some other rechargeable batteries, you can energize the pack whenever and however you like without worry about battery memory problems.

And the company says the pack will hold its charge for roughly a year and a half, which speaks to the GYRO's purpose of occasional use. There's no battery level indicator whatsoever, though. When the power pack runs low, the device just stops working and an LED blinks a power-hungry distress signal.

In other words, you won't be doing hours of work with this tool. It's meant to help you tighten (or loosen) those sneaky, problematic screws that lurk in every house. To that end, it also has a tiny LED near the business end that illuminates your work area.

Black & Decker throws in two standard screw driving bits with each GYRO. You also receive a two-year warranty that covers any defects.

To use GYRO, you grip differently than most screwdrivers. The pistol-like handle end of GYRO flattens into a smooth, wide surface that settles into the palm of your hand. That big surface is actually one large button, called the motion control activator, and because you'll be pressing into the screw head each time you work, you'll hardly notice it. But unless that activator is depressed, the motor won't work.

In addition to the activator, Black & Decker built in a 45-second shutoff timer. It protects against accidental battery usage in case the motion activator gets jammed against that roll of duct tape in your junk drawer.

Those specs make up the backbone of the GYRO. On the next page, we'll drill down into the details of what makes this device unique to the realm of power tools. 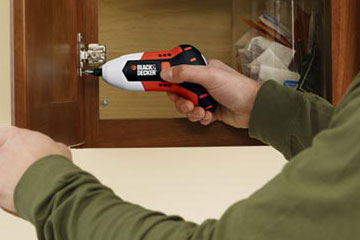 How Blowtorches Work
Pliers
10 Multifunction Tools on the Market