Browse the article How Refrigerators Work 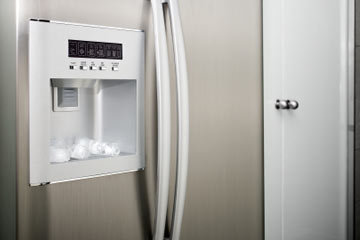 Can you imagine what life was like before the refrigerator came along.
©iStockPhoto.com/Roberto Anguita Escribano

The next time you indulge in an ice cold drink on a hot day, you have your refrigerator (and onboard freezer) to thank for the refreshingly chilled beverage. It wasn't so long ago that you'd have to be very rich or well connected to score a chilled drink with a few ice cubes floating inside. Today, we take refrigeration for granted, but once upon a time, fortunes were made shipping large blocks of ice around the world in insulated holds to sell to the rich.

Before refrigeration, preserving food was a big job. You could salt foods, and in winter, you could bury food in a snow drift and hope the critters didn't find it. To stay stocked with the essentials, though, you had to work at it -- or be rolling in money. Refrigeration is one invention that changed the way we conduct our daily lives. We can preserve food more easily nowadays, so we have much less to worry about when it comes to food-borne illnesses. The food supply is more stable, too. That gallon of milk can last a couple of weeks in the fridge as opposed to a couple of hours on your countertop. That's huge. It means you don't need to keep a cow in your backyard if you want a regular supply of milk.

The fundamentals of refrigeration are also at work in another important household appliance: the air conditioner. It's estimated that around 5 percent of all the electrical energy used in the U.S. is expended to keep our homes cool. That's pretty amazing, especially when you consider the fact that the principle behind most refrigeration is simple. Here it is in one sentence: When a liquid evaporates, it absorbs heat in the process. If you want to get rid of heat, you need to coax a liquid to convert to its gaseous state [source: ACEEE].

The Purpose of Refrigeration

The fundamental reason for having a refrigerator is to keep food cold. Cold temperatures help food stay fresh longer. The basic idea behind refrigeration is to slow down the activity of bacteria (which all food contains) so that it takes longer for the bacteria to spoil the food.

For example, bacteria will spoil milk in two or three hours if the milk is left out on the kitchen counter at room temperature. However, by reducing the temperature of the milk, it will stay fresh for a week or two -- the cold temperature inside the refrigerator decreases the activity of the bacteria that much. By freezing the milk you can stop the bacteria altogether, and the milk can last for months (until effects like freezer burn begin to spoil the milk in non-bacterial ways).

Refrigeration and freezing are two of the most common forms of food preservation used today. For more information on other ways to preserve food, see How Food Preservation Works.

Parts of a Refrigerator

If you pour a little rubbing alcohol on your skin, it'll feel cold -- really cold. It isn't refrigerated, so how does this happen? Well, alcohol evaporates at room temperature the way water evaporates at a low temperature in an oven. As it evaporates, it absorbs the heat on the surface of your skin, making your skin cooler. A special coolant called a refrigerant functions in a refrigerator the way alcohol works on your skin, except in a refrigerator, the coolant is trapped inside a series of coils. As it makes a circuit through them, it changes back and forth from a liquid to a gas.

To pull off this frosty feat, a refrigerator uses five major components:

To understand what's happening inside a refrigerator, let's learn a little more about how refrigerants work. You will need:

Add the thermometer to the water filled bowl and place both in the oven. Set the oven to 400 degrees Fahrenheit (204.4 degrees Celsius).

By repeating these four steps, Max can reuse the same water over and over again to provide refrigeration.

If you're at sea level, you'll see that the temperature of water will begin to boil at 212 degrees Fahrenheit (100 degrees Celsius), but if you live in the mountains, where the air pressure is lower than it is at sea level, the boiling point will be a bit lower, say 190 to 200 degrees Fahrenheit (87 to 93 degrees Celsius). This is why many foods have special high-altitude cooking directions printed on the box.

The refrigerator in your kitchen uses a cycle that is similar to the one described in the previous section. But in your refrigerator, the cycle is continuous. In the following example, we will assume that the refrigerant being used is pure ammonia, which boils at -27 degrees F. This is what happens to keep the refrigerator cool:

By the way, if you have ever turned your car off on a hot summer day when you have had the air conditioner running, you may have heard a hissing noise under the hood. That noise is the sound of high-pressure liquid refrigerant flowing through the expansion valve.

Pure ammonia gas is highly toxic to people and would pose a threat if the refrigerator were to leak, so all home refrigerators don't use pure ammonia. You may have heard of refrigerants know as CFCs (chlorofluorocarbons), originally developed by Du Pont in the 1930s as a non-toxic replacement for ammonia. CFC-12 (dichlorodifluoromethane) has about the same boiling point as ammonia. However, CFC-12 is not toxic to humans, so it is safe to use in your kitchen. Many large industrial refrigerators still use ammonia.

If you own an RV, chances are you have a gas- or propane-powered refrigerator. These refrigerators are interesting because they have no moving parts and use gas or propane as their primary energy source. Also, they use heat to produce the cold inside the refrigerator.

A gas refrigerator uses ammonia as the coolant, and water, ammonia and hydrogen gas to create a continuous cycle for the ammonia. The refrigerator has five main parts:

You may not realize it, but modern refrigerators don't only cool things down, they keep things from getting too cold. Yes, you guessed it: refrigerators have onboard heaters. They're low-wattage, but refrigerator heaters are very convenient and effective at doing everything from heating the evaporator coils to melt any accumulated frost, to keeping the butter chilled but not so cold that you'll need a chain saw to cut through it.

You won't need a bag of ice to keep your potato salad cold if you have a handy cooler that plugs into your cigarette lighter. It uses a unique process known as the Peltier effect, a thermoelectric effect, to produce cold temperatures. It's pretty neat, and something we haven't discussed yet.

Named after the French 19th century physicist who discovered it, you can create the Peltier effect yourself using a battery, two pieces of copper wire, and a piece of bismuth or iron wire. Attach the copper wires to the two poles of the battery, and then connect the bismuth or iron wire between the two pieces of copper wire. (The bismuth/iron and copper have to be touching -- it's this connection that causes the Peltier effect.)

Electric coolers aren't the only unique inventions out there designed to chill your lunch. Solar powered refrigerators are another option. If you plan to spend time camping (or want to start your own hot dog stand), you may want chilled beverages but not have the electricity to power a standard refrigerator. By now, you won't be surprised that a number of energy solutions can provide power to refrigeration systems. In a solar powered refrigerator, a simple solar panel does the honors. Using the sun's rays to make something cold? Now that's ingenious.

Speaking of refrigeration and coldness, have you ever used one of those "instant cold packs" that looks like a plastic bag filled with liquid. You hit it, shake it up and it gets extremely cold. What's going on here?

The liquid inside the cold pack is water. In the water is another plastic bag or tube containing ammonium-nitrate fertilizer. When you hit the cold pack, it breaks the tube so that the water mixes with the fertilizer. This mixture creates an endothermic reaction -- it absorbs heat. The temperature of the solution falls to about 35 F for 10 to 15 minutes.

For more information on refrigeration and related topics, check out the links on the next page.