Is it better to replace my washing machine or repair it?

When to Replace Your Washing Machine 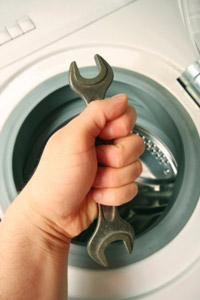 Are you handy or are your just going to make things worse?
iStockphoto/Thinkstock

If repair estimates have you considering a new washing machine, you may also want to consider today's cost for that shiny appliance. After all, prices have probably gone up since you bought your current washer. When weighing whether to toss or keep your old machine, you'll want to do a side-by-side comparison, factoring in how long the old and new machines will last, as well as the costs to operate -- like electricity, water and detergent -- over their anticipated lifetimes.

While they usually have a higher price tag than standard models, some washing machines are designed to use less water and energy. Appliances that bear the Energy Star seal, for example, use 10 to 50 percent less energy and water than conventional models [source: Owens]. (Energy Star is a collaborative program of the United States Environmental Protection Agency and the Department of Energy that endorses energy-efficient appliances.) Front-loading washing machines have become more popular household choices because they use less water and detergent than top-loading washers. Keep in mind that front-loading machines can cost two to three times as much as traditional consumer washers so take your loads per week into account. If you're a frequent washer, the savings might add up quickly. Tax credits and rebates for purchasing energy-efficient appliances can offset the sales price, too.

The average life expectancy of a new washing machine is 11 years. Consumer Reports recommends replacing any appliance that's more than eight years old, unless it's a high-end model and has a particular appeal to you. Others suggest replacing any top-loading washer manufactured in 1999 or earlier. Even replacing a washing machine you purchased up to the year 2005 can reduce water consumption [source: Dunn]. If an appliance is still relatively new yet no longer covered under warranty and has broken down a lot, you may be better off getting rid of it.

If you're concerned about the impact your decision has on the environment, you have even more to consider than monetary costs and convenience. Let's say you're of the opinion that it's greener to fix an appliance at any cost than to junk it. You may not be able to find replacement parts for a washer that's more than 10 years old. And remember that older appliances use more water and electricity than those manufactured after 2005. On the other hand, it may take years for the new washing machine to pay for itself in saved energy consumption. And one final note: old washers don't usually end up in landfills these days. Their steel is recycled.

For more information on replacing and repairing washing machines and other appliances, spin to the next page.