by Chelsea Hedquist
NEXT PAGE 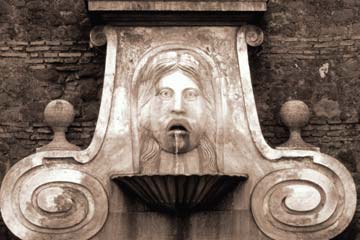 The door opens and, practically before you cross the threshold, you feel a sense of calm and tranquility settling over you. The air somehow feels gentler against your skin and cleaner as you breathe it in. The knots of tension in your neck and shoulders begin to loosen as the soothing sound of gurgling water reaches your ears. Welcome to your own personal nirvana (the Buddhist variety, not the Seattle grunge band sort), courtesy of an unassuming and surprisingly uncomplicated wall fountain.

The word "fountain" may conjure up images of places such as Peterhof Palace in St. Petersburg or Versailles in France. But the wall fountain is a much subtler and simpler cousin of these grandiose water displays. It's even a far cry from burbling garden fountains that empty into koi-filled ponds. Rather, wall fountains are quite compact, electricity-powered contraptions that fit right into the décor of a home or office. Unlike fountains that shoot or spray water, a wall fountain sends water in a cascade down a flat front surface. While the effect may not always be as dramatic as an outdoor fountain -- and the ensuing calm and relaxation not always as instantaneous as that described above -- wall fountains certainly add aesthetic value to their surroundings.

Wall fountains are most commonly made from four basic materials: resin, fiberglass, concrete and stone, with resin being the most affordable and stone being the most expensive material. The design of wall fountains can vary from classical to modern, simple to elaborate, even slightly kitschy to downright sophisticated. Designer fountains, for example, feature works of art incorporated into the fountain's surface. But what almost all wall fountains have in common is a no-frills and no-fuss method for circulating water. Unlike outdoor fountains -- and the rare, oversized wall fountain that requires a large amount of water -- wall fountains skip the hassle of plumbing and rely on the clever little duo of a fountain pump and its impeller, which you'll learn more about in the next section.