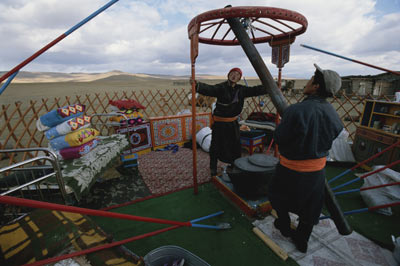 For centuries, Mongolian herders have been on the move, looking for fresh grass for their sheep, goats and camels. They needed a structure that could accommodate their nomadic lifestyle, as well as the desert heat and the freezing nights of Mongolia. The ger met both of these needs. In addition to portability, the ger was easy to both heat and cool. The felt that made up the walls of the structure gave these people their name -- nomad was a word for felt [source: Kemery].

Though the yurt may seem like a simple circular tent, everything about it had significance to the ancient Mongolians who perfected it. They were immensely concerned with maintaining balance and honoring the connection between all things. The ger was a symbol for the entire universe and of the occupant's place within it. The roof was like the sky, and the opening at the top of each ger was the sun and a portal to the world above. The fireplace in the center of each ger represented the portal to the world below.

The furnishings within a ger have always been arranged the same way. In the center is a hearth or a stove, which represents the five basic elements of Earth: Earth, wood, fire, metal and water. Since most Mongolians are Buddhist, an altar or a shrine would be at the north end of the ger, directly opposite the south-facing door. The ger's inhabitants sleep with their heads in the direction of the altar unless they are Muslim, in which case their heads point south, to Mecca.

The eastern and western sides of the ger are the domains of the women and men, respectively. Men's bedding would be to the west of the altar, and around this side the men's tools are kept. The women are on the other side with their domestic goods, such as cooking utensils and sewing equipment. Male and female visitors to a ger stay on their designated sides, while servants, poor visitors and animals would be seated near the entrance.

Many Mongolians, even those living in towns, continue to live in gers. There are many variations in design across Asia, including a wall-less ger, which more resembles a teepee, and a six-story ger. But gers have changed in interesting ways since they made the jump to other countries. On the next page we'll find out about the variety of options available today.

Rules of the House

Just as the interior of the ger was always set up according to certain conventions, the process of visiting a ger involved a certain amount of tradition and ceremony that continues to this day. It is disrespectful to step on the threshold of the ger while entering, and after an established series of salutatory questions, visitors are expected to tip back three glasses of arak. Arak is the distilled spirit of airag, or fermented mare's milk. When warm, it is said to taste like sake, but as it cools, its smell and taste reflect its farmyard roots. Once these opening pleasantries are exchanged, the visit can begin -- just be sure to follow traditional rules, such as the ones that prohibit pointing your feet at the fire, writing in red pen and whistling [source: King].