What is edible landscaping? 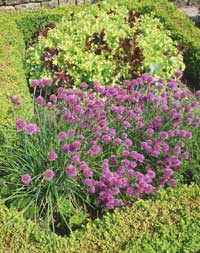 Who knew chives were so attractive? A bed of lettuce and flowering chives.
Steven Wooster/Getty Images

The idea of planting crop-yielding and ornamental plants together isn't new but rather revived. Ancient Babylonian and Egyptian gardens used edible landscaping techniques. As early as the 10th century, Benedictine monks created herb-lined gardens with neighboring roses. It wasn't until the Renaissance that people began intentionally separating purely ornamental plants.

One older, more traditional form of edible landscaping is called a potager, or kitchen garden. Finding its strongest roots in France in the 16th and 17th centuries, these small container gardens were meant to supply herbs for soups. They gradually expanded into larger plots with more plant variety, not unlike modern edible landscapes.

Urban vegetable gardening experienced a renaissance in the 1970s and is going through one again today, thanks to rising food prices and environmental concerns. Growing one's own fruits, vegetables and herbs saves money and the greenhouse gas emissions associated with processing and transporting the goods to and from the grocery store.

In the 1980s, landscape designer and environmentalist Robert Kourik coined the term "edible landscaping" to denote a new kind of gardening that marries aesthetic design with crop production [source: McClure]. Rosalind Creasy brought the concept into the mainstream gardening world with her 1982 publication "The Complete Book of Edible Landscaping."

Emphasizing creativity with gardening techniques, edible landscaping uses fruit- and vegetable-bearing plants, herbs and edible flowers throughout yards to turn the traditional lawn into a more utilitarian space. By bordering with lettuce, allowing kiwi vines to crawl up trellises and using mint as a ground cover, edible landscaping encourages growth and harvest rather than monotonous maintenance.

More recently, edible landscaping has taken up an environmentalist approach. To some advocates, lawns waste precious energy because of the pesticides, fertilizers and electric mowers that people use to maintain them [source: Kourik, Creasy and Kane]. Yet from all that input, you receive only the visual gratification of a green yard, rather than a kitchen full of fresh ingredients. Edible landscaping also promotes locavore habits of only eating food from your local area.

Fritz Haeg is one of today's most prominent edible landscape advocates who runs the Edible Estates program that transforms suburban yards into edible gardens. Haeg recently completed his sixth project with a lawn in Baltimore, Md. He transformed a meticulously manicured lawn into a productive space with blueberry bushes, pole beans, lettuces and other plants. In addition to the casual beauty of edible landscaping, Haeg views it as a way to reunite communities and help protect the environment.

What other specific plants would you often find in an edible landscape, and how could you start one? Dig in to these answers on the next page.