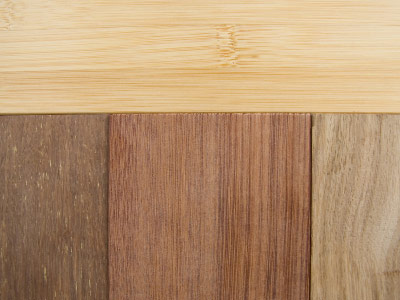 When trees are cut down, the stump and roots are left in the ground to die. However, when bamboo is properly harvested, the root system remains intact, allowing the bamboo to grow again to its full size. Bamboo is usually harvested when the stalks are around six years old. If bamboo is harvested earlier, it won't produce a strong floor. Harvested later, the bamboo will be too brittle. Since it's hollow, there's very little waste produced when making the flooring. Every part of the grass is used in the process, making a very sustainable flooring product.

In the first part of the production process, the exterior, green layer and shoots of the bamboo stalk are removed. Then, the stalks are cut into strips called logs, resembling the length of the final flooring products. The bamboo then goes through a purification process, usually by boiling it to remove any insects or sugars that may be left in the bamboo. Some bamboo is steamed under pressure to give it a darker color, which we'll discuss later.

Next, the bamboo logs are sorted into "A" and "B" grades based on quality. After they're separated, the strips are dried in a kiln. Then, the strips are assembled either horizontally or vertically, glued together and pressed under high pressure to achieve the strength and durability that makes bamboo flooring so popular.

The final step is milling the bamboo blanks (what bamboo boards are called after they're formed and glued). Milling creates the finish of the flooring. At this step, the blanks are shaped into perfectly measured boards with smooth edges so they can be properly installed. In this part of the process, cuts called grooves are created in the blanks for click-on flooring, which we'll discuss later.

Now, here's how we get so many colors of bamboo flooring. After the bamboo stalks are cut into strips, manufacturers can choose to keep the strips a natural color, or follow a carbonization process to darken the wood.

Natural bamboo - After the harvesting and stripping processes, bamboo strips are boiled to eliminate impurities. The natural color of the bamboo emerges. It's a light -- almost blond -- wood color. This is considered to be the "natural" bamboo color, and further color processing is not necessary. The boards are then glued and pressed together into bamboo planks.

Carbonized bamboo - To carbonize bamboo, bamboo strips are immediately pressure-steamed after stripping to give the bamboo a darker color. Carbon is added to the steam chamber, which dyes the bamboo throughout the strips, not just on the surface. Carbonized bamboo ranges in color from a honey or caramel color to a light coffee. Carbonizing actually decreases the floor's strength about eight to ten percent, so keep that in mind when researching bamboo flooring.

Stained bamboo - Bamboo planks can also be stained into a wide spectrum of colors after the bamboo planks have been produced. Bamboo distributors can dye the wood virtually any color of the rainbow to accompany any interior design style. Stain can be painted on or rubbed on by hand.

Bamboo can be processed into boards in a variety of styles and colors. The surfaces can also be finished or left unfinished. There are an infinite number of options to consider when choosing bamboo flooring. First, let's take a closer look at bamboo flooring construction.

Bamboo isn't just the darling of the flooring industry.The versatile grass can also be processed into such useful items as window shades, bed linens, towels, furniture, cutting boards, cabinetry, floor mats, paper, chopsticks and toys. It can even be blended with cotton for T-shirts. 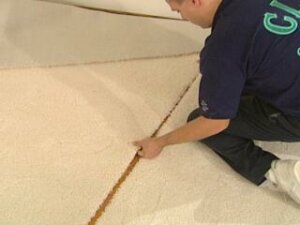 What do you need to know when choosing carpet? 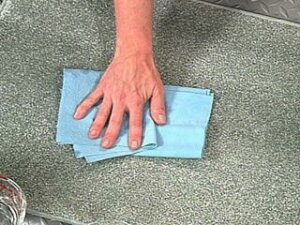 Should I hire someone to install my carpeting?