10 Ways to Break Into a House 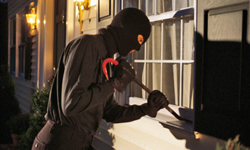 There are many ways for people to break into your home. Knowing how it's done can help you prevent them from succeeding.
Comstock/Thinkstock

When we think of a burglar, we think of a stereotypical ski-masked man dressed head to toe in black, crouched down, creeping in the dead of night, carrying a professional break-in artist's ideal toolkit. As common a culprit, however, is the average-looking person dressed in average street clothes on your average workday, entering via an unlocked door or a brick-induced hole in a glass door.

There's no time of day in which your home is immune from burglaries; there are no standards of practice when it comes to how a burglar breaks in. Of the reported 2 million commercial and residential burglaries reported to the U.S. Department of Justice in 2009, most (61 percent) were forcible entry. 32.6 percent of burglars found the easy way in, and the balance represented foiled attempts [source: U.S. Department of Justice].

If your home is burgled, the financial losses you'll sustain are bad enough. The trauma and unease in its aftermath, however, is a bell that can't be un-rung, and many burglary victims never again feel safe in their own homes.

The best way to handle burglars is to pre-empt their plans with proven preventive measures. Burglars look for, and sometimes create, specific characteristics and situations when choosing where and how to break in. In the sections to come, we will look at what stamps a bull's eye on your home, methods used for break-ins and 21st century tools that burglars use for finding their next victims.