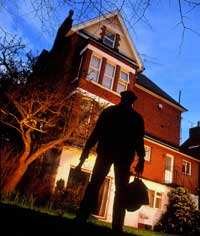 ­With the advent of the deadbolt in the 1960s, residential burglaries began their descent [source­: Sullivan]. As more homes installed them in the 1970s, burglaries went on a steady decline and reached a plateau in the past few years. Today, 25 percent of homes in the United States have electronic security systems, not to mention reinforced glass, superior lock technology and a veritable army of private security guards monitoring neighborhoods [source: Sullivan].

But in spite of the dwindling numbers, almost 1.5 million homes were broken into in 2006 [source: FBI Uniform Crime Reports]. And when burglaries happen, police often have a difficult time tracking down the culprits. Of all property and violent crime clearance rates reported by the FBI, burglary ties for the lowest at 12.6 percent in 2006 [source: FBI Uniform Crime Reports].

­When thinking about how to prevent this from happening to you, there are a few things you should keep in mind. When thieves break into homes, there's a greater chance of them doing so during the day when many people are at work. Also, around 40 percent of annual household burglaries in the United States are not forced entries, meaning someone was able to walk, climb or crawl inside of houses almost as easily as if the owners left a key in the door [source: Bureau of Justice Statistics].

To keep unwanted intruders out of your home, you don't have to turn your property into a suburban Fort Knox. There are many solutions that require no money at all -- just a little common sense. Read on to learn about 10 things you can do that take little time or resources to make your home a safer haven.