How to Create a Home Library 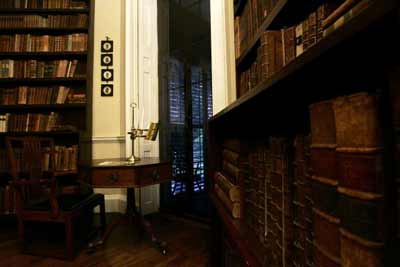 A glimpse of Thomas Jefferson's library at his home, Monticello
Alex Wong/Getty Images

"I cannot live without books," declared U.S. President Thomas Jefferson to his friend John Adams. Indeed, Jefferson was an obsessive book collector from a young age, amassing three separate home libraries in his lifetime. The first collection was destroyed when his family home burned down in 1770. Jefferson wrote to a friend that he would have felt less grief to lose the money he had spent on the books than he did losing the books themselves [source: Monticello].

Jefferson's library might fit your conception of an old-fashioned home library with leather-bound books, wood paneling and uncomfortable furniture. But home libraries can be a dynamic expression of the owner's personality. Creating a home library is a fun way to display your interests while establishing a special space for reading.

While there's no right or wrong way to design a library, the questions can be daunting, especially to someone with hundreds or thousands of books. How do I organize? How do I get everything to fit? We'll discuss how to build a home library that works for you. On the next page, we'll look at ideas for organizing a collection that includes everything from French philosophers to fictional boy wizards.

What room should I use for my home library?

Most any room will do with a few exceptions. While reading in a room with big windows and lots of light is refreshing, storing books in natural light is harmful to them. Attics and basements heavy with humidity will cause mold and attract insects. In addition, basements are prone to flooding.