Circuits to all the devices in your home that require electrical power start from the fuses or circuit breakers. There are two types of circuits: feeder and branch. Feeder circuits use thicker cables that travel from the main entrance panel to smaller distribution panels called subpanels, or load centers. These auxiliary panels are located in remote parts of a house or in outbuildings, and they are used for redistribution of power, such as in a garage. Feeder circuits aren't found in all houses. 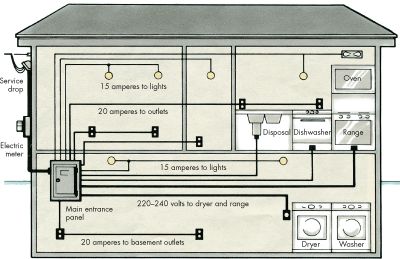 All of the circuits in a home that run from either the main entrance panel or from other smaller panels to the various points of use are branch circuits. For 110-120-volt needs, a circuit branches out through a circuit breaker from one of the main buses and from the ground bus. For 220-240 volts, many circuits use only the two main buses. But all three wires are needed for devices that operate on both 110-120 volts and 220-240 volts.

The 110-120-volt branch circuits go through fuses or breakers, which are labeled either 15 or 20 amps. The 15-amp branches go to ceiling lamps and wall receptacles in rooms where less energy-demanding devices, such as table lamps, are found. The larger 20-amp circuits go to receptacles in the kitchen, dining, and laundry areas where heavy-duty appliances are used.

How can you know the load on a circuit? Add up the individual wattages for all lamps and appliances plugged into each circuit. When computing the load on each branch circuit, allow for motor-driven appliances that draw more current when the motor is just starting up than when it's running. A refrigerator, for example, might draw up to 15 amps initially but will quickly settle down to around 4 amps. Suppose the refrigerator is plugged into a 20-amp branch circuit and a 1,000-watt electric toaster (which draws a little more than 8 amps) is also plugged into that circuit. If the refrigerator motor starts while the toaster is toasting, the total current load will exceed the current-carrying capacity of the circuit, and the fuse will blow or the circuit breaker will trip.

Keep reading to learn about proper safety practices when you're working with your home electricity system.