History of Hydroponics and Soil-less Gardening 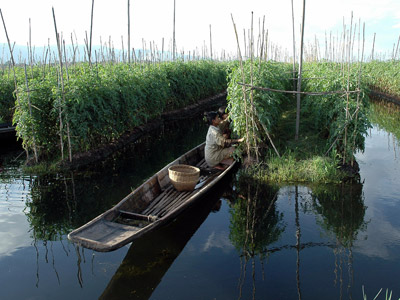 Farmers from Myanmar's Intha tribe pick tomatoes from a floating garden in the famous Inle Lake. These gardens are probably similar to the ones cultivated by the Aztecs on Lake Tenochtitlan.
Khin Maung Win/AFP/Getty Images

While it's easy to imagine this kind of process being labeled as a bunch of new age science fiction, hydroponics has actually been in use for thousands of years. The famous Hanging Gardens of Babylon, one of the seven wonders of the ancient world, are largely believed to have functioned according to hydroponic principles. Built around 600 B.C. in Babylonia, or Mesopotamia, the gardens were situated along the Euphrates River. The area suffered from a dry, arid climate that rarely saw rain, and it's believed that the lush gardens were watered using a chain pull system, which carried water up from the river and allowed it to trickle down to each step or landing of the garden structure.

During the 10th and 11th centuries, the Aztecs developed a system of floating gardens based on hydroponics. Driven out of their land, they settled at Lake Tenochtitlan. Unable to grow crops on the lake's marshy shore, they built rafts out of reeds and roots. These rafts were topped with a bit of soil from the bottom of the lake, and then floated out to the center of the water. Crops would grow on top of the rafts, their roots reaching through the rafts and down into the water. Marco Polo's writings indicate he witnessed similar floating gardens while visiting China in the late 13th century [source: Indianetzone.com].

Formal research and publications on hydroponics didn't begin until the 17th century. Sir Francis Bacon, a British scientist, philosopher and politician did research on soil-less gardening in the 1620s. His work on the subject was published posthumously in 1627 and sparked an incredible wave of research into hydroponics.

In 1699, another English scientist, John Woodward, performed tests involving spearmint growth in various water solutions. He attempted to grow spearmint plants in rain water, river water and water that had been mixed with soil and then drained. He found that the mint grew faster and produced healthier plants in the water solution that had been mixed with soil. His conclusion was that plants would grow better in less pure water than they would in distilled water. We know today that his results were due to minerals that remained in the water after it had been mixed with the soil [source: Glass].

­­A Berkeley scientist, William Gericke, promoted the use of hydroponics in commercial agriculture. Using a process he called "aquaculture," he touted the benefits of soil-less gardening by growing massive tomatoes in his home via water and nutrient solutions. After finding that the term "aquaculture" was already being used to describe the study of aquatic organisms, he coined the term "hydroponics," which we still use today [source: Jensen].

Two other Berkeley scientists, Dennis Hoagland and Daniel Arnon, later expanded upon Gericke's research. In 1938, they published "The Water Culture Method for Growing Plants without Soil," which is widely considered to be one of the most important texts ever published about hydroponics. Several of the nutrient solutions they developed are still used today.

According to a 1938 Time magazine article, one of the first commercial uses of hydroponics occurred during this period based on the research taking place at Berkeley. Tanks of mineralized water were used to grow beans, tomatoes, and vegetables on tiny Wake Island, a small piece of land in the Pacific Ocean. This island was used as a refueling stop for Pan-Am Airways, and the food grown there was used successfully to feed the airline's staff and crew. Similar situations occurred during World War II, as hydroponics was used to grow crops for troops on barren Pacific Islands [source: Time Magazine].

William Gericke is credited with giving hydroponics its name, but his work is often clouded by scandal. Though his hydroponic research was done while he was employed at UC Berkeley, he claimed that his work on the theory was done off the clock, in his own time. He therefore refused to share any of his work or research, and left the university before publishing his famous work on the subject, “Complete Guide to Soil-Less Gardening.” Hoagland and Arnon were given the job of trying to replicate his research, and fortunately for the future of hydroponics, they’re credited with many of their own contributions to the science [source: Time Magazine].