Why Use a Hydroponic System? 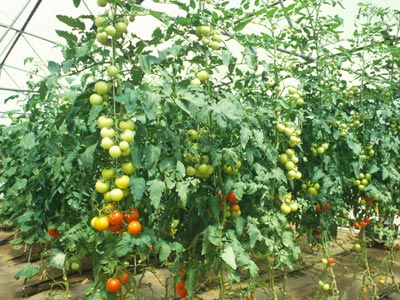 These plants yield tomatoes in a place where they normally wouldn’t grow.
VisionsofAmerica/JoeSohm/Digital Vision/Getty Images

So why go through all the trouble of setting up a hydroponic system? After all, people have been growing food just fine for thousands, if not millions of years using good old-fashioned dirt. Hydroponics offers some significant benefits over traditional farming, and as word about these benefits spreads, more people will turn to hydroponics for their agricultural needs.

­First, hydroponics offers people the ability to grow food in places where traditional agriculture simply isn't possible. In areas with arid climates, like Arizona and Israel, hydroponics has been in use for decades. This science allows the people of these areas to enjoy locally grown produce and to expand their food production. Similarly, hydroponics is useful in dense urban areas, where land is at a premium. In Tokyo, hydroponics is used in lieu of traditional soil-based plant growth. Hydroponics is also useful in remotes locales, such as Bermuda. With so little space available for planting, Bermudians have turned to hydroponic systems, which take around 20 percent of the land usually required for crop growth. This allows the citizens of the island to enjoy year-round local produce without the expense and delay of importation. Finally, areas that don't receive consistent sunlight or warm weather can benefit from hydroponics. Places like Alaska and Russia, where growing seasons are shorter, use hydroponic greenhouses, where light and temperature can be controlled to produce higher crop yields.

We also must consider the significant environmental benefits to hydroponics use. Hydroponics systems require only around 10 percent of the water that soil-based agriculture requires. This is due to the fact that hydroponic systems allow recycling and reuse of water and nutrient solutions, and the fact that no water is wasted. This can have quite an impact on areas where water is scarce, such as in the Middle East and parts of Africa. Similarly, hydroponics requires little or no pesticides and only around 25 percent of the nutrients and fertilizers required of soil-based plants. This represents not only a cost savings but also benefits the environment in that no chemicals are being released into the air. Finally, we must consider the environmental impacts of transportation. As hydroponics allows produce to be grown locally and requires fewer areas to import their crops, there is a reduction in both price and greenhouse gas emissions due to reduced transportation requirements [source: Jensen].

Next, hydroponics offers us the benefit of a shorter harvest time. Plants grown in this manner have direct access to water and nutrients and therefore, are not forced to develop extensive root systems to allow them to find the nutrients they need. This saves time and produces healthier, lusher plants in about half the time as traditional agriculture.

So why isn't hydroponics taking over? This is due to several distinct disadvantages associated with these systems. The first is the high capital investment when compared with soil farming. Though hydroponics is typically much cheaper over time, it does require a substantial upfront cost to establish any sort of larger system. Next, there's the threat of power failure, which can cause pumps to stop working and ruin crops. Finally, many people fear that hydroponics requires substantial know-how and research, when in fact, it's very similar to traditional gardening. After all, plants rely on certain nutrients in order to grow, and these nutrients don't change, no matter which system you're using.