The Science Behind Hydroponic Nutrients 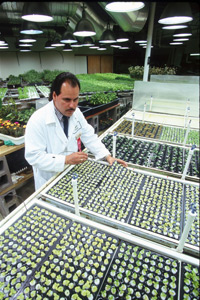 Before we can take a look at how hydroponics works, we must first understand how plants themselves work. Generally speaking, plants need very little to grow. They can subsist on a simple blend of water, sunlight, carbon dioxide and mineral nutrients from the soil. Plants are able to transform light energy into chemical energy to form sugars that allow them to grow and sustain themselves. Thus, plants convert carbon dioxide, water and light into sugars and oxygen through a process called photosynthesis. The photosynthesis process requires that the plant has access to certain minerals, especially nitrogen, phosphorus and potassium. These nutrients can be naturally occurring in soil and are found in most commercial fertilizers. Notice that the soil itself is not required for plant growth: the plant simply needs the minerals from the soil. This is the basic premise behind hydroponics -- all the elements required for plant growth are the same as with traditional soil-based gardening. Hydroponics simply takes away the soil requirements.

­There are several different types of hydroponic systems, though each is based on the same initial concepts. Here, we'll examine each type, discover how and why it's used and see which kinds of plants respond best to each method.

Ebb and Flow Systems require a medium, such as perlite, which serves no purpose other than to provide stability for the plant's roots. The plant derives no nutrients from the medium itself. Ebb and flow systems include a tray in which the plant is placed in a medium; below the tray in a separate container is a reservoir containing water and mineral solutions. The water from the reservoir is periodically pumped up into the tray. This floods the tray and allows the plants to absorb water and nutrients. Gradually, the water drains back into the reservoir due to gravity. Ebb and Flow systems work best with small plants like herbs and are typically used in smaller hydroponic setups, such as those in the home.

Nutrient Film Technique (NFT) is a water-based system that requires no soil or mediums. They're built using wooden channels, which support polyethylene film liners. Plants such as tomatoes and cucumbers are placed on the channels, and the nutrient enriched water is pumped to the high end of each channel. The channels slope down, and water is collected at the end to be pumped back through the system and reused. Only plants with large established root systems will work with this technique.

Drip Systems are set up almost identically to an ebb and flow system, although instead of water being pumped through one large tube, it's pumped through many small tubes and drains onto the top of the plants. This system is ideal for plants that don't yet have a developed root system, and like an ebb and flow system, works best with smaller plants.

Aeroponics is another water based system, which, like NFT, requires no medium. Plants are suspended on a tray, with their roots freely dangling below. The entire tray is placed into a box that has a small amount of water and nutrient solution in the bottom. A pump system is used to draw the water up, where it's sprayed in a fine mist onto the entire plant and root in a continuous manner. This system is the most difficult to set up and manage, but it has great potential for large commercial uses.

Wick Systems are similar to ebb and flow systems in that they're medium-based. Plants are placed into a tray filled with a medium such as perlite or rockwool. At the base of each root, a nylon rope is placed, which is allowed to dangle freely, extending beyond the bottom of the tray. The entire tray is then placed on top of a reservoir. The nylon ropes absorb the water and nutrients, wicking them up to the plant's roots. This system is desirable because it requires no pumps or other equipment to be purchased [source: Roberto].

For more on what goes into setting up the different types of hydroponic systems, read on to the next section.