Hydroponics Growing and the Future of Agriculture 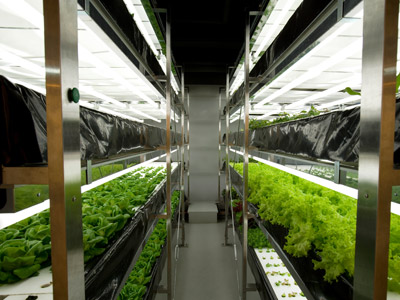 Hydroponics lettuce farming -- possibly how all of our vegetables will be grown in the future.
Zomi/Stone+/Getty Images

Hydroponics is the fastest growing sector of agriculture, and it could very well dominate food production in the future. As population increases and arable land declines due to poor land management, people will turn to new technologies like hydroponics and vertical farming to create additional channels of crop production. Currently, arable land comprises only around 3 percent of the Earth's surface, and the world population is around 6 billion people, resulting in around 1/5 hectare (2,000 square meters) of arable land per capita. By 2050, scientists estimate that the Earth's population will increase to 9.2 billion, while land available for crop and food production will decline. To feed the increasing population, hydroponics will begin replacing traditional agriculture [source: Chamberlain].

To get a glimpse of the future of hydroponics, we need only to examine some of the early adopters of this science. In Tokyo, on the island nation of Japan, land is extremely valuable due to the surging population. To feed the citizens while preserving valuable land mass, the country has turned to hydroponic rice production. The rice is harvested in underground vaults without the use of soil. Because the environment is perfectly controlled, four cycles of harvest can be performed annually, instead of the traditional single harvest.

­Hydroponics also has been used successfully in Israel, which has a dry, arid climate. A company called Organitech has been growing crops in 40-foot (12.19-meter) long shipping containers, using hydroponic systems. They grow large quantities of berries, citrus fruits and bananas, all of which couldn't normally be grown in Israel's climate. The hydroponics techniques produce a yield 1,000 times greater than the same sized area of land could produce annually. Best of all, the process is completely automated, controlled by robots using an assembly line-type system, such as those used in manufacturing plants. The shipping containers are then transported throughout the country [source: Organitech]

There has already been a great deal of buzz throughout the scientific community for the potential to use hydroponics in third world areas, where water supplies are limited. While the upfront capital costs of setting up hydroponics systems is currently a barrier, in the long-run, as with all technology, costs will decline, making this option much more feasible. Hydroponics has the ability to feed millions in areas of Africa and Asia, where both water and crops are scarce.

Hydroponics also will be important to the future of the space program. NASA has extensive hydroponics research plans in place, which will benefit current space exploration, as well as future, long-term colonization of Mars or the moon. As we haven't yet found soil that can support life in space, and the logistics of transporting soil via the space shuttles seems impractical, hydroponics could be key to the future of space exploration. The benefits of hydroponics in space are two-fold: It offers the potential for a larger variety of food, and it provides a biological aspect, called a bioregenerative life support system. This simply means that as the plants grow, they will absorb carbon dioxide and stale air and provide renewed oxygen through the plant's natural growing process. This is important for long-range habitation of both the space stations and other planets [source: Heiney].

For more information on hydroponics, getting your hands dirty in the garden and related topics, dig through the links below.

Hydroponics Boldly Goes Where No Man Has Gone Before