How to Spring Clean 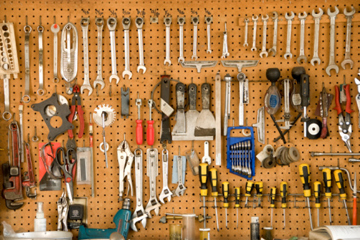 Even if you're not neat by nature, it's hard to deny the appeal of a well-organized set of tools.
iStockphoto/Thinkstock

These aren't generally the pretty areas of the house -- the utility rooms, laundry rooms, garages, attics and storage places. Unless they're finished and actually designed to be attractive, that is. For so many of us, these areas become dumping grounds because nobody's going to really check them out anyway, are they? No, but you're going in and out of some of these rooms often so you owe it to yourself to make them clean and at least bearable.

My laundry room/utility room is in my finished basement, but that part isn't finished, so it can be unpleasant to go in there. I just don't think about cleaning my washer and dryer much, but they need to be cleaned like anything else. Wipe them down on the outside with your all-purpose cleaner to remove dust and any spilled detergent residue. Washers can get an unpleasant smell sometimes -- you can run a cycle with baking soda, borax or another cleaner that does a good job of freshening things up.

For the dryer, your focus should be on the lint trap and the vent hose. Both can get full of lint and hair, which can not only potentially be dangerous, but can also make your dryer take longer to dry clothes. While you're in there, clear off any shelving, clean it, and reorganize. For the utility side, if you haven't changed your furnace filter recently, it needs to be done at least every few months. Wipe it down as well as the other elements of your HVAC system. You might want to get the whole thing inspected if you haven't done so recently.

Ever seen a pristine garage or attic? Me neither. It's where we put the stuff that doesn't belong anywhere else. That doesn't mean that these rooms have to be trashed, though. Removing everything and washing it may not be practical. However, you can still wipe down and organize what's there. Move items that you use often to the front and long-term storage things to the back of shelves. Make sure that you have things properly stored to avoid damage from heat, humidity or rodents and keep as much off the floor as you can. Label everything that isn't obvious. In the garage, things like installing a pegboard for tools to keep them neat can make a big difference.