5 Home Repairs You Really Should Know How to Do Yourself

by Sara Elliott
Prev NEXT
4 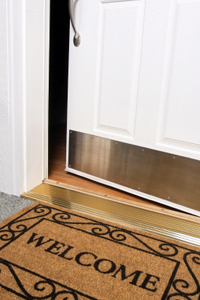 Don't leave your guests out in the cold because your door won't open.
©iStockphoto.com/jhorrocks

You have doors all over your home, and even though they look innocent and simple, doors need occasional maintenance and repair. From squeaks to sticking, door problems are usually minor but can be a nuisance.

Wooden interior doors aren't exposed to the elements, but they're still subject to seasonal climate changes. In humid weather, wooden doors can swell if there isn't enough room to accommodate expansion between the door and the frame. Inspect the door to make sure there aren't any loose hinge screws or deteriorated hinges that could be causing the problem. Tighten loose screws by first placing a door wedge on the latch end of the door to balance the weight. If the screws look OK but the door meets resistance when it closes, make a note of the tight spots. If a door starts sticking only during humid months or during the rainy season, it may need to be planed. Before you take this step, though, consider the fact that in a few months the problem may go away by itself.

To plane the door, you'll need a special carpenter's plane. A plane will scrape a small layer of wood off the door's edge the way a cheese plane removes a narrow slice from a block of cheese. Draw a line along the door at the spot where it's hitting the jamb or lintel. If the tight spot is located at the top of the door or on the handle end, you can plane the door without taking it off its hinges. Just be careful to make an angle cut first in order to avoid splintering the wood or veneer. If the tight spot is on the hinge end or bottom of the door, tap out the hinge pins with a hammer and screwdriver and set the door on its side to plane it. Since planing the hinge end may result in having to reset the hinges, make this step a last resort option.

Sticking or binding doors can sometimes cause squeaks because they put extra pressure on the hinges. Hinges can also get noisy when they begin to oxidize. If your door hinges announce anyone entering or leaving the room, you might be able to silence them with a little lubricant. First, cover the area under the door with a cloth and then apply penetrating oil to the hinges. Be sparing at first. After applying a few drops, open and close the door to work lubricant into the moving parts of the hinge. Give it a couple of minutes, and try opening and closing the door one more time. If there's still a squeak, apply a few more drops and go through the process again.

If oiling the hinges doesn't solve the problem, try cleaning the hinge pins. First, place a shim under the door for support and remove the hinge pins one at a time. Scour them with steel wool, and clean the pinholes with a small circular wire brush.

Let's proceed to the next page, where we'll talk about working with caulk.