by Bambi Turner
Prev NEXT
2 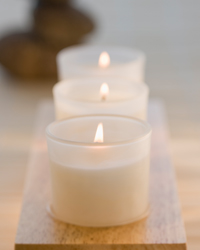 Candles can bring light -- or a little romance -- into a room.
Tom Grill/Photographer’s Choice RF/Getty Images

Candles have been used throughout history to provide light, warmth and ambiance in the home. They're often associated with romance and are a great way to create a mood of relaxation or calm. Almost every home has a selection of candles handy in case of power outages.

The earliest candles were created by the ancient Romans, who rolled sheets of papyrus and dipped them in melted tallow. It is believed that the Chinese created candles in the same way, using rice paper in lieu of papyrus. Since this time, the wax used to create candles has changed dramatically. The early tallow that was used created a bad smell when burned and was messy due to soot and debris. It was eventually replaced by beeswax, whale oil and then paraffin. Today, candles made with soybean wax are popular, as the wax is soft, slow burning and odor-free.

Throughout history, candles have played a major part in many religions. Hanukkah, the Jewish festival of lights, is known for its use of candles, which have played a role in this holiday since its inception around 165 B.C. The emperor Constantine was said to have used candles in an Easter celebration in the 4th century A.D., and there are also references to candles in the bible. Many Buddhists light candles at their shrines, where the candle's light represents the enlightenment they seek. In Wiccan religions, candles represent gods and goddesses and are common during religious ceremonies [source: National Candle Association].

Candles can be incorporated into your home in many forms, from collections of small candles to large pillars in their own decorative holders. Even if they're never lit, today's candles are created to complement your home's décor simply based on their color and design.