How to Get Mildew Out of Clothes

Can Mildewed Clothes Make You Sick?

Prolonged exposure to mildew can cause a lot more than a runny nose.
Brand X Pictures/Thinkstock

Prolonged exposure to mold and mildew can have serious consequences for your health and well-being. Many suffer immediately after being exposed to spores, especially if they rest on clothing in close proximity to the mouth and nose. While it's impossible to rid the environment -- indoors and out -- of mold and mildew, it's important to regularly inspect clothing for stains and remove them when possible.

Touching or inhaling mold and mildew can cause a wide range of health problems in both allergic and non-allergic people -- regardless if the spores are dead or alive. Ailments include throat irritation and nasal issues like congestion, sneezing and bloody noses. Eyes may water and turn red, and skin can break out in hives or rashes.

People at high risk for mildew-related health ailments include infants, children, pregnant women, immune-compromised patients, the elderly and those with existing respiratory conditions. Anyone with a history of respiratory problems should steer clear of damp areas -- which are breeding grounds for mold and mildew -- especially those with chronic lung illnesses, like asthma, sleep apnea and chronic obstructive pulmonary disease.

Health problems due to mold and mildew likely occur when people inhale large quantities of spores. In a 2004 study by the Institute of Medicine, a possible link was found between mold exposure and upper respiration problems. When exposed to mold spores, those with asthma appeared to suffer from exacerbated symptoms, and even healthy participants exposed to mold and mildew-infested areas experienced coughing and wheezing. The Institute of Medicine also discovered limited findings that link mold exposure to respiratory illness in children who are healthy otherwise. 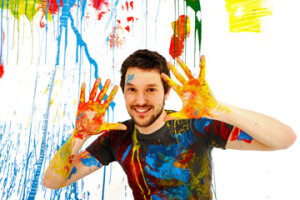 How to Get Paint Out of Clothes

How to Remove Perspiration Stains 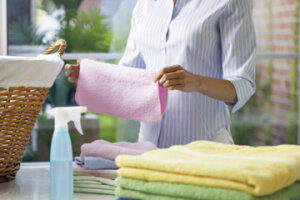 How to Clean Mold Off Clothing