What's the best way to add an interior wall to an existing structure? 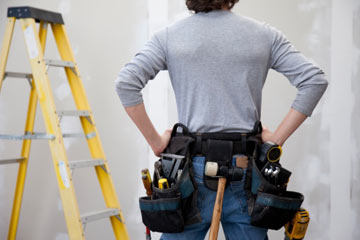 Home improvement junkies are seldom satisfied with status quo. That large bedroom you hardly ever use? Why not split it into a small guest room and a home theater where you can kick back and watch a movie? Maybe you want to turn part of a room into a home office. Or you might be dreaming of a walk-in closet or a pantry for your kitchen. Regardless of what your DIY heart desires, all of these projects require the same thing: a new wall. And you're in luck, because adding a wall to an existing space is a cinch for any do-it-yourselfer who's handy with tools.

It's important, however, to start with a plan. First off, where do you want your wall? Once you've decided, take a look at the existing structure. If you've removed the plasterboard in the area where you plan to work, you'll be able to see the ceiling joists and wall studs, the parallel wooden timbers beneath those surfaces. If you're installing your wall in a finished space, use an electronic stud finder to hunt down the studs and joists. Mark clearly where they are so that you can attach the new wall to them later.

If your new wall will be perpendicular to the ceiling joists, no problem, you can attach it to each joist where they intersect. If you're building the wall parallel to the joists, you have two options. One is to locate it directly under one of the joists. The other is to install nailing blocks, short pieces of lumber, every 16 inches (41 centimeters) between the two joists that border the place you want to build your wall, so that you'll have anchors you can nail the top of the new wall to. Attaching the wall to studs in the adjoining walls will give it added stability, but is not absolutely necessary. In fact, there may be no stud available at the point where you want to add your new wall.

Most interior walls are made from 2-by-4-inch (5-by-10 centimeter) lumber, more commonly referred to as 2-by-4s. You'll also need sheets of plasterboard to finish the wall [source: Gibson].

If you have to remove any walls as part of your renovation, make sure they're not load-bearing walls. Those are walls on which other parts of the structure, such as beams, trusses or roof rafters rest. If you have doubts, ask a contractor. The wall you'll be adding will usually not be load-bearing. Such walls are often called partitions -- they simply divide spaces.

Once you've done a little planning, you're ready to assemble your wall. In the next section, you'll learn how to get started.

Building a Wall on the Floor

While you're working, be sure to take ordinary safety precautions. Wear goggles and ear protection when needed. Get help lifting.

Start by marking precisely where you want your wall. Measure to make sure each end of the wall is the same distance from a parallel wall. At each of these points, place a carpenter's square against the existing wall at ceiling height and draw a line out a few inches at a right angle to the existing wall along the line where you want the edge of the new wall to be. Tap a nail into each of these lines. Stretch a chalked string between the nails and snap it to make a line. This will be the top edge of the new wall.

Now drop a plumb line -- a string with a weight on the end -- from each nail. Mark the spots directly below the top line. Snap another chalk line between these points. This marks the bottom of the wall. Attaching the wall to the floor will be easy. You can attach it directly to almost any kind of flooring except carpet.

If the plasterboard has been removed, use a level to find out if the existing walls, floor and ceiling are square. If so, you can make life easier by building your new wall on the floor. First, cut two plates, the boards that will form the top and bottom of the wall, from 2-by-4s. They will run the entire length of the new wall. Lay them side by side. Mark the locations of the studs on both plates. There will be one at each end. The rest should be separated by 16 inches (41 centimeters) [source: Gibson].

Measure the height of the room, and then subtract the combined thickness of the two plates. This will determine the length of your studs. Cut the studs, place them between the top and bottom plates, and attach them with 3.5-inch (9-centimeter) nails or screws.

With a helper, lift the wall into place. Line it up with the lines you made on floor and ceiling. "Sometimes people set the bottom along the line, then push the top into place," says Donald Holmes, a Milan, New York-based contractor. "But it's often easier to line up the top of the wall, then tap the bottom into place using a sledge hammer and a piece of scrap wood to protect the plate."

Apply a level to make sure the wall is exactly vertical. Shim any gaps between the new wall and the ceiling. Nail or screw the wall to the floor and to the ceiling joists. If the new wall aligns with a stud on the adjoining wall, attach it there as well.

Your wall is up and ready for finishing. But what if you're working in a space that's finished or where the walls are not exactly square? Then you'll want to build the wall in place. We'll talk about that method in the next section.

A simple and effective way to reduce sound leakage between walls is to apply silicone caulk to the sides of the studs and the plates, which anchor the wall at top and bottom, while you're building. Put up the plasterboard over the caulk. Use screws to attach it. Next, apply more beads of caulk to the surface of plasterboard, tracing the lines of the plates and studs. Install a second layer of plasterboard. Your wall will not be much thicker, but this setup will dampen sound better than an ordinary wall [source: soundproofing101.com].

Building a Wall in Place

Building a wall in place usually makes sense when the ceiling you're working with is covered with plasterboard. You won't damage the ceiling by forcing the pre-built wall against it. This method of adding an interior wall also makes it easier to adapt to existing walls, floors and ceilings that aren't quite square.

Measure the distance between the two plates. If the floor or ceiling is uneven, be sure to measure the exact distance at every stud. Cut each stud so that it fits snugly between the two plates. First, insert the studs at either end of the new wall. Correct positioning of the two plates should make them vertical, but use a level to make sure. You'll have to toe-nail (nail at a 45-degree angle) or screw the studs to the plate. Connect them with the studs in the existing wall if you can (your stud finder will tell you where they are). Continue attaching the rest of the studs in the same way. Metal stud-framing clips, which let you nail straight into both stud and plate, are an alternative to toe-nailing [source: Holmes].

Whichever method you've used to put the wall up, it's time for finishing. Measure 4 feet (1.2 meters) from the floor at each end. Snap a chalk line across all the studs. Install cross studs snugly between the end studs at this level. "They give your wall some extra support in case someone bangs into it," says contractor Donald Holmes. "And they provide a place to attach your plasterboard."

You'll finish the project by attaching sheets of plasterboard to each side of the new wall with nails or screws. Then you'll apply plaster-like joint compound and paper tape to each joint and corner. Sanding and painting are the final steps. Voila: where you had one room, now you have two.

If you're putting up your wall on a concrete floor, cut the bottom plate from pressure-treated 2-by-4-inch (5-by-10 centimeter) lumber. Put the plate in place, drill through it and continue to drill 1 inch (2.5 centimeters) into the floor using a masonry bit. Apply construction adhesive to the bottom of the plate and screw it into place with masonry screws. Continue building the wall in place [source: rona.ca].

Author's Note: What's the best way to add an interior wall to an existing structure?

I've done a fair bit of building to fix up my own home, including putting up interior walls. Working with an older house always presents challenges. Nothing is exactly square and you don't know what kind of surprises lurk behind the walls.

One method that has often saved my bacon is to use a cordless drill driver and screws for framing instead of a hammer and nails. Self-starting screws are easy to put in place and hold tightly. Best of all, you can easily remove them if you make a mistake. And guess what -- all do-it-yourselfers make mistakes. An added bonus: The method doesn't put the same stress on your elbow as swinging a hammer.

What are the most used exterior house colors?
What's the best way for apartment-dwellers to compost?
How Air Curtains Work