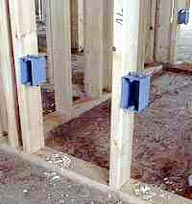 The article How Power Distribution Grids Work goes into extensive detail on how power gets from the power plant to your house. The purpose of the electrical system in a house is to distribute the power safely to all of the different rooms and appliances.

The electrician for this house first placed all of the boxes for electrical outlets, lights and switches:

Then he ran wires from the fuse box to each box and between boxes. Here's what the fuse box looked like once he got done:

Wires were first run through to the boxes. A lot of drilling is necessary, both down into the crawl space and up into the ceiling, as well as through studs to run wires between boxes:

Wires are then pulled through the boxes, clipped and capped: