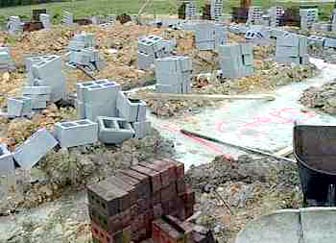 The first crew on the site handles site preparation. Often, this crew and the foundation crew are the same people, but sometimes not (especially if there are a lot of trees on the lot). Houses are generally built on a foundation that is either a basement, a crawl space or a slab. The site-preparation crew typically arrives on the site with a backhoe and/or bulldozer. The crew's job is to clear the site of any trees, rocks and debris, level the site if necessary and dig as necessary for the foundation being built.

(In these pictures, the bricks for the crawl space have already been moved into position while the concrete cures.) The concrete in the trench is generally about 18 to 24 inches wide (45.72 to 60.96 cm) and 18 to 24 inches deep. Once it hardens, it forms a massive concrete "beam" on which the house rests. The width of this concrete beam is controlled by the compressibility of the soil. In light soils, the beam will be wider to try to spread out the load, while in heavy clay soils it can be narrower.

If the site slopes, the concrete beam is stepped, like this:

Concrete takes approximately four weeks to cure to full strength (depending on the weather), so once the concrete is poured nothing will happen for some period of time while the initial curing takes place.