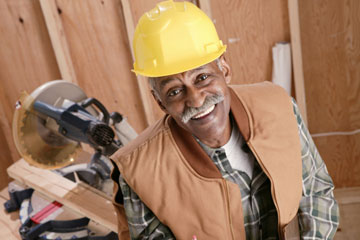 Need to know the difference between an angle driver and an angle grinder? We've got the A-Z on toolbox basics to get you started.

Allen Wrench - Also known as a hex key, this wrench is used to turn screws with hexagonal head sockets, or Allen screws.

Anchor Bolts - Large construction-grade bolts that attach the sill plate of a building to the foundation.

Angle Driver - This screwdriver works around difficult corners by turning at an angle.

Angle Grinder - A hand tool with textured discs that attach to the head to grind, polish and cut.

Angle Stop - The shutoff valve that disconnects the water line from the faucet or toilet.

Awl - A small tool with a pointed head that punctures small holes in leather and wood. Similar to an ice pick.

Adjustable Bevel Square - An angle-measuring tool with a base and a movable metal arm useful for cutting wood pieces that fit together, such as baseboards.

Backsaw - A handsaw equipped with a stiffening strip of metal across the top of the blade that prevents it from shifting around while sawing.

Balusters - Short columns or posts that support a rail.

Bolts - A type of fastener that screws into a nut.

Caulk - A waterproof sealant applied to cracks and crevices to make them watertight.

Chalk Line - Chalk-treated cord that marks out straight lines when snapped against a surface.

Crosscut Saw - A standard handsaw that cuts at right angles across the wood grain.

Clamp - A grip or fastener that holds materials together tightly.

Digital Protractor - An electric device that gives a digital readout of wall angles for cutting and installing trim.

Double Square - A squaring tool with an adjustable bevel blade.

Doweling Jig - A type of drill guide that moves at a 90-degree angle to the object being drilled. Handy for positioning dowels in wood projects.

Drywall Hammer - A specialized hammer with a rounded head for driving nails into drywall.

Electric Screwdriver - A power tool that drives and removes screws.

Electrical Contact Cleaner - A cleaning solution made of compressed air and a solvent that's used to dissolve food, grease or other debris on electric parts.

Electrical Tester Tools - Lights, probes and other test devices that determine whether a power source is working and locate circuit problems.

Electronic Level - An electric device that detects the slope and angle of a surface.

Epoxy - A strong resin adhesive used to bond a variety of materials.

Fasteners - The family of glues, nails, bolts, screws and clamps that holds materials together.

Files - An abrasive slab of metal used to smooth down surfaces.

Flooring Chisel - A hand tool with a flattened, thin blade used to install and remove flooring.

Fretsaw - A very fine-toothed backsaw with a 6-inch (15-centimeter) blade designed for cutting around curves.

Furring Nails - Nails that come with washers to create space between two surfaces.

Glues - Chemical substances that bond surfaces to each other.

Greenboard - A type of waterproof drywall that works well in bathrooms and laundry rooms. Also known as blueboard.

Grouting Tools - Sponges and brushes used to apply grout in joints and cavities.

Hacksaw - A metal-cutting saw that has a slim, fine-toothed blade attached to a frame.

Hand Drill - A manual tool that converts crank motion into the circular motion of a drill chuck.

Hammer - A simple tool designed to manually drive nails, brads and other fasteners into softer materials, such as wood or drywall.

Handsaw - Handheld, manual saws that consist of a handle and serrated blade.

Hand Plane - A carpentry tool with a flat base and an angled blade for trimming and detail work.

Hand Screw Clamps - A type of clamp used for binding wood objects at an angle.

Insulated Screwdriver - A screwdriver outfitted with a plastic handle and coating to stop the flow of electricity.

Jack Plane - A type of woodworking plane that smooths and squares off pieces of wood.

Jeweler's Screwdriver - A screwdriver with a fine head meant for screwing and extracting small screws.

Jigsaw - A power saw with a fine-toothed blade that works well on curves and is used for cutting a variety of shapes.

Keyhole Saw - A specialized saw with a pointed blade and handle that is useful for making small holes in wood or drywall.

Level - A secondary household tool that indicates whether a plane is flat or horizontal.

Locking Pliers - Pliers that lock in place around an object being gripped.

Magnetic-tip Screwdriver - A screwdriver with a magnetized tip that clings to the screw during installation.

Miter Saw - A circular saw that cuts well across the wood grain and at angles.

Multipurpose Glues - Chemical adhesives that can bind together a variety of materials.

Measuring Tools - An arsenal of tools that quantify the length, width and breadth of objects and the distances between them.

Nest of Saws - A set of saw blades that can attach to the same handle.

Nail Guns - Handheld machines that launch nails at high speed, fully embedding them in a piece of wood in only a fraction of a second.

Nails - Fasteners manufactured in a variety of shapes, sizes and metals.

Nail Puller - A clamping tool designed to grip nail heads and extract the fasteners from a material.

Organizing Your Tools - Store tools in an orderly way to maintain sharpness, prevent rust and keep them accessible.

Pliers - A handheld tool that grips objects firmly to be turned, bent or otherwise manipulated.

Plane - A woodworking tool for removing or shaping wood.

Plumbing Tools - The set of tools useful for fixing toilet and plumbing problems.

Plum Line - A string or line with a weight attached to one end that serves as a vertical guide.

Plumb Bob - The weight at the end of a plumb line that keeps it straight.

Pry Bar - Also known as a crowbar, this curved piece of metal has a two-pronged claw at one end for jimmying free nails or other objects.

Quick Action Clamp - Highly useful clamps that have a fixed jaw on one side and adjust on the other side.

Ripsaw - A specialized handsaw for manually cutting wood in the direction of the grain.

Reciprocal Saw - A power saw that uses a reciprocating motor to move a blade back and forth. It's useful for larger jobs that involve cutting wood, metal, plastic and drywall.

Router - A high-speed woodworking power tool that can cut and trim a multitude of shapes in wood.

Rip Hammer - A heavier-duty hammer that has a straighter claw for more efficient prying or ripping.

Right-angle Drill - A heavy-duty power drill designed to bore holes in the middle of stud spaces. It's used most commonly for plumbing and electrical work.

Rubber Mallet - A rubber-headed mallet meant for pounding more fragile materials that might be damaged with a steel hammer head.

Saber Saw - A power saw driven by a reciprocating motor that moves a small saw blade up and down the object to be cut. It works well for quickly cutting and shaping wood, plastic and even metal.

Square - Woodworking measuring rules that show whether components are perpendicular or at right angles to each other.

Stud Finder - A battery-operated electromagnet that identifies the location of studs.

Screwdriver - A handheld tool that fastens and removes screws.

Sander - Tools that use abrasives to remove surface material.

Steel Wool - A bundle of thin metal fibers spun into a pad for scouring, polishing and finishing.

Swiss Army Knife - A pocket-sized gadget with a variety of miniature attachments, such as scissors, screwdrivers and rulers.

Table Saw - A circular saw mounted on a table or workbench.

Tape Measure - A portable measuring device used to quantify the size of an object or the distance between objects.

Torpedo Level - A small leveling tool that tests whether a plane is straight.

Universal Clamp - Clamps designed to hold edges of materials together.

Voltage Tester - A tool consisting of a small neon bulb with two insulated wires that tests for electrical current in a circuit.

Volt-Ohm-Milliammeter - A precise, battery-powered tool used to check the continuity and strength of an electrical current flowing through the wire or component. It's used while the power is turned off, so there's no danger of electric shock.

Wrench - A hand tool that grips and turns a bolt head or nut.

Web Clamp - A clamp that tightens around large materials with a soft nylon webbing.

Wet Saw - A saw made for cutting ceramic tile.

Wood Mallet - A wide-faced wooden hammer that's safer to use on wood than a metal hammer.

Wire Cutters - Pliers specially designed to grip and cut through wire and metal.

Wood Screw - A screw with a tapered shaft that penetrates wood more easily.

Zigzag Folding Rule - A wooden ruler with metal joints that allow it to fold and extend.

Disinfecting vs. Sanitizing
Can You Get Stains Out of Clothes After They've Been Washed?
Why Are Steel Studs More Common Than Wood?